We got some huge trailers last week, most notably The Dark Tower and Dunkirk, and this week should also not disappoint. We’ve already had new trailers for Stephen King’s IT and Wonder Woman from last night’s MTV awards but let’s run through the trailers we can expect over the coming days.

Warner Bros. announced last week that the new Blade Runner 2049 trailer is arriving today with a trailer tease. The trailer clocks in at 2mins 13secs and we can expect it at 9am PT/noon ET/5pm UK, when a special Q&A with the film’s cast and director takes place.

Paramount are launching the final Baywatch trailer which we can expect this week. It’s been rated by Consumer Protection BC and looks set to be the film’s first red band trailer. 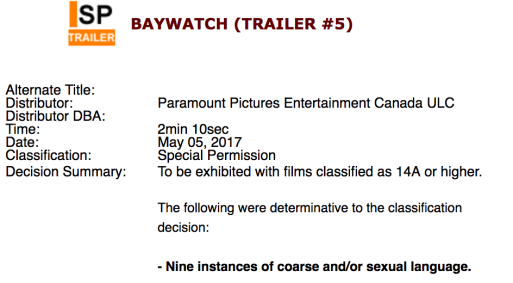 Murder on the Orient Express

Last week we got our first look images at Johnny Depp and Daisy Ridley in Kenneth Branagh’s murder mystery Murder on the Orient Express. First official images from a film are usually followed shortly by the trailer and so can we expect the movie’s first footage as early as this week? It’s unconfirmed but could very happen, especially after the trailer was shown during a presentation on Friday:

'Murder on the Orient Express' director and star Kenneth Branagh & cast in London — during footage presentation of film that opens Nov 17. pic.twitter.com/R3WzLlxixM

Saw about 15 minutes of Murder on the Orient Express plus first trailer. Looks like Kenneth Branagh has crafted a winner. Can't wait to see.

Other new trailers to expect this week are Girls Trip and Luc Besson’s Valerian.