In this series, I’ll be watching all the movies in the Marvel Cinematic Universe to date. Working through the films one-by-one, I’ll dig into the good – and bad – of the immensely popular franchise, starting with 2008’s Iron Man, and ending with 2014’s Guardians of the Galaxy. Read on and refresh yourselves with these characters before Avengers: Age of Ultron is unleashed – and see if you agree with my opinions. Let us know in the comments section below. 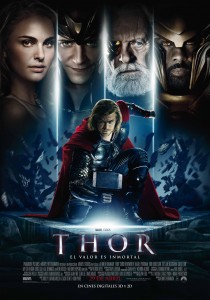 Marvel’s first foray into full-on fantasy remains a terrifically enjoyable ride; when it was announced that Thor would be the next Avenger to get the big screen treatment, it was difficult to imagine such an outlandish and potentially ridiculous figure leading a movie of his own. Somehow, Marvel Studios managed to bag Kenneth Branagh to direct; the thesp had previously helmed critically acclaimed Shakespearean adaptations, and his clout helped sell a lot of people to go and see Thor when it came out. His directorial talent, and the perfectly picked Chris Hemsworth as the God of Thunder, helped shaped the Asgardian into a hit franchise.

Thor‘s opening half-hour shows off some marvellous world-building; Asgard is a realm of extraordinary beauty, its impossible architecture matched only by its godlike inhabitants. One of the most powerful – and ornery – is Thor, who is stripped of his powers and banished to Earth. There, he meets Jane (Natalie Portman), whose motley crew of research scientists try to figure out the cosmic significance of his coming to their mortal realm. On his heels is his brother Loki, god of mischief, who will go on to be the MCU’s most beloved villain: played with gleeful malevolence by Tom Hiddleston, his double-crossing villainy threatens to destroy Asgard. Along the way, veteran Anthony Hopkins dons his best hammy-acting act as Odin; he, Thor and Loki lock horns in the MCU’s best climax so far, an epic struggle that puts relationships at the forefront of the CGI-heavy action (as opposed to the more formulaic city-levelling that bookends Thor: The Dark World). Another huge positive is the score: an orchestral motif gives proceedings an air of majesty, a showcase that Marvel can sometimes make you sit jaw-agape, as well as whoop and holler.

There are problems, of course. Can we really believe that Thor completely changes tack, and regains his worthiness in only a couple of days? Plus, not enough time has been spent on the Earthbound segments in getting them looking – and generally feeling – as good as Asgard does. But then, Thor is a movie about two halves of the same thing: two realms, two brothers, magic and science – which Thor explains to us is ‘one and the same’ where he comes from. Thor is Marvel stepping into fantasy – and it works fantastically.

Next on the MCU Diary: Captain America: The First Avenger