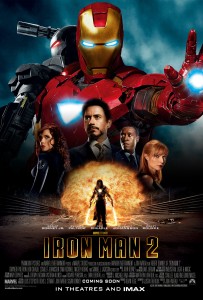 The middle-child always has problems. The second in any trilogy is usually plagued by narrative ennui, always attempting to validate its existence – but any sequel in the Marvel Cinematic Universe needs to set up the next film in the franchise. As such, Iron Man 2 is at war with itself; while it commendably doesn’t try to stay within the original Iron Man‘s shadow, it stretches itself absurdly thin in establishing a wider universe for the movies that follow it. As a result, this movie is Marvel Studios head honcho Kevin Feige’s biggest failure; in not allowing any natural story to breathe, Tony Stark’s second outing becomes the MCU’s worst entry.

Jon Favreau returns to the director’s chair, and from the outset that feels like a good thing, for the first hour of Iron Man 2 is genuinely engrossing stuff; Mickey Rourke’s presence lends villain Ivan Vanko a real air of danger, who’s out to get Stark for the sins of his father, Howard. Tony’s suit is also slowly poisoning him. And to top it all off, he’s being demanded to hand over the Iron Man ‘weapon’ to the government under accusations that it poses a threat to national security. This first 60 minutes feel just like an Iron Man movie should; plenty of Robert Downey Jr’s effortless banter, an incredible first-act action scene at a race track, and a sense that it’s all gently bulding up to something spectacular. The only thing spectacular here, I’m afraid to report, is how hard Iron Man 2 falls in its second half: torn apart by narrative junctures that either fly off inconsequently into the ether or fall flat, what is supposed to be a thrilling superhero movie – with one of the coolest superheroes there is – becomes a slog of epically boring proportions. Any threat, or hint of high stakes, are constantly wiped clean by a screenplay that makes it clear that its writer, Justin Theroux, had his head shoved into a tumble dryer by Feige and then given a pen.

But the bigger problem with Iron Man 2 is the problem that would loom over any shared universe, and that’s the world-building; it can either be fun, or feel forced. Characters are thrown into this movie’s narrative in order to set up the others, and even the actors themselves aren’t served well: both Don Cheadle’s and Scarlett Johansson’s introductions as War Machine and Black Widow respectively show them as slightly annoying blank slates, yet to be properly served by their proper, more natural – and well-written – appearances in The Avengers and Iron Man 3. Thankfully for all of us, Marvel would learn by their mistakes in turning Iron Man 2 into little more than an extended trailer for The Avengers. It gets better from here on in, I promise.

Next in the MCU Diary: Thor