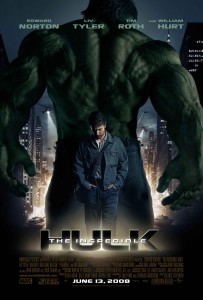 Time has not been kind to 2008’s The Incredible Hulk. Not only was it overshadowed by the same year’s Iron Man, which was all kinds of better, its star Edward Norton would eventually leave the role as Bruce Banner thanks to some pesky contract disputes. Of course, good things came from his departure; it gave Joss Whedon a rare opportunity in The Avengers to retool the Hulk and make him a crowd-pleasing scene-stealer, while Mark Ruffalo filled Banner’s shoes as the downtrodden scientist more comfortably than Norton ever did. But the movie isn’t without merit.

Norton plays the aforementioned Banner, a genius who specialises in gamma radiation. One day, his interest in the subject gets the better of him: once exposed to an amount of the unique radiation that should kill him, he instead gets the power to turn into a gigantic, green-skinned rage monster – which we’ve all been educated in before, of course, thanks to Ang Lee’s maligned 2003 picture, Hulk. Director Louis Leterrier is smart to stick closely to Zak Penn’s screenplay and mould his movie into a man-on-the-run thriller for the most part, before it transforms into a full-on monster movie (with a neat bit of Cloverfield-inspired handheld camerawork) toward its climax. Nonetheless, while Norton is a compelling human lead, I feel that the Hulk himself hasn’t had the same kind of love; the CGI that brings him to life looks a bit dated even now, while his transformation from Banner is triggered by a high heart-rate – in other words, it doesn’t necessarily take anger to turn him. Therefore, belying everything that makes the Hulk… well, the Hulk.

Seven years on, there’s sadly not much reason to watch The Incredible Hulk. It feels almost entirely left behind, save a few scraps of connective tissue in the form of Tony Stark’s painfully shoehorned appearance in its final scene (which should have been a post-credits sting). Of course, there are still lots of fun fan-service moments to bounce the rote plot along (a cameo from original TV Hulk Lou Ferrigno a highlight), and its zippy pace benefits it greatly. I can’t say that, despite its place as one of the ‘founding’ films of the Marvel Cinematic Universe, The Incredible Hulk is essential viewing, as we get our introduction to a far better interpretation of the character in 2012’s The Avengers. Of course, if you’re in the mood for a dumb action / sci-fi flick, you could do worse – like watch any of the rest of Leterrier’s movies, for instance.

Next in the MCU Diary: Iron Man 2