In this new series, I’ll be watching all the movies in the Marvel Cinematic Universe so far. Working through the films one-by-one, I’ll dig into the good – and bad – of the immensely popular franchise, starting with 2008’s Iron Man, and ending with 2014’s Guardians of the Galaxy. Read on and refresh yourselves with these characters before Avengers: Age of Ultron is unleashed – and see if you agree with my opinions. Let us know in the comments section below. 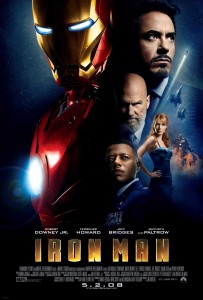 If you release a superhero movie in the same summer as The Dark Knight, there’s a good chance that it’ll be easily forgotten. Not so in the case of Iron Man; helmed by Jon Favreau, whose most notable work before had been as the writer of Swingers and the director of Elf, his new superhero movie would be a blast of fresh air much like The Dark Knight was, but for different reasons. Tony Stark is a genius playboy philanthropist, and head of America’s top weapons manufacturer, who gets kidnapped by a terror cell known as The Ten Rings and held captive in a cave in the middle of the desert. His ensuing escape from his grimy prison, using his ingenuity, his newly-made friend Yinsen, and a terrifyingly powerful suit of armour, is a fist-pumpingly triumphant sequence that gets us entirely on board with Stark, a character who would otherwise have been loathsome and annoying.

But even without that plight, Marvel’s greatest move – and a decision that they’re still profiting from today – is casting Robert Downey Jr as the narcissistic tech-genius who finds a heart. Before then, the actor had success as smooth-talking types in unique thrillers like Kiss Kiss Bang Bang, A Scanner Darkly and Zodiac, but as Stark, he channels that innate charm onto a canvas large enough for his electric personality – and Jon Favreau’s world is the perfect canvas. When the movie does eventually reach its special effects-heavy third act, it’s clear that Iron Man‘s strengths lie in the spaces between the proper superhero stuff. It’s the character-driven scenes, mostly between Stark and Gwyneth Paltrow’s delightful Pepper Pots, where Favreau frames his dialogue with an Altmanesque looseness, making sure that Iron Man charms our pants off while pulling the proper emotional beats, often at the same time.

Downey Jr’s delicate balancing of arrogance, pithy and sincere pathos is the formula that makes his performance ageless: despite being in five films (six if you count his cameo in The Incredible Hulk), we’ve yet to tire of his interpretation of Stark, decidedly better than the original comic character. And in Favreau’s wittily scripted, smartly played movie, he turns one of Marvel’s best heroes on the page into the biggest one they have on the screen.

Next in the MCU Diary: The Incredible Hulk