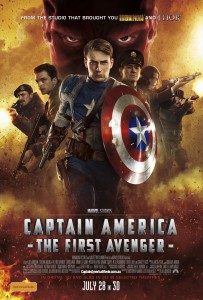 I like to think of Captain America: The First Avenger as the black sheep of Phase One. Scrutinised unfairly, the movie has picked up somewhat of a bad reputation since its release in 2011 – but its true form is as a high-octane period piece than a fully-fledged superhero flick.

Set during WWII, this is a different Marvel movie from the outset. Using extraordinary special effects to turn the bulky Chris Evans into the teensy, weak-bodied Steve Rogers (which still looks stunning), we’re given a unique hero on his own journey of righteousness; picked for the army as a super-soldier test subject, he’s given a dose of vita-rays and becomes Captain America, the golden-hearted, stars-and-stripes wearing avenger who’ll travel through the circus of American war propaganda before saving the US from the Nazis’ covert research division, Hydra. The movie boasts an intriguing villain in the form of Red Skull, played with relish by Hugo Weaving, whose original brand of fascism serves as a terrifying force for Cap to deal with. The rest of the supporting cast do brilliant jobs, too: Stanley Tucci, refreshingly restrained here, acts as Rogers’ emotional focal point, while Tommy Lee Jones spits out the movie’s best lines as a grizzly general. And of course, there’s Hayley Atwell, whose sparkling performance as Agent Carter here sparked her own TV show. These great performances all point to one thing – that Captain America: The First Avenger is always about character. Yes, there’s the typical Marvel-required bouts of computer-generated thrills and spills, but it’s the quieter moments littered through the film that give us a hero we can really get behind.

On that note, Chris Evans’ greatest trick is to never make Cap seem bland. In the comics, he’s routinely given a more expletive-filled and barby personality to make up for his lack of interesting flaws; here, his moral compass always points true, and his actions and affectations follow in line. After the arrogance of Stark, the troubled psyche of Banner and the man-child syndrome of Thor, Captain America is just nice. And despite the fact that some of the visuals don’t have the same polish as the previous MCU films, or that there may be one montage too many, this supremely enjoyable and character-driven picture shows us why Captain America was the first Avenger.

Next in the MCU Diary: The Avengers