The thoughts on DC and Warner Bros shared universe (the DCEU) is somewhat mixed thus far and perhaps not what the studios had hoped for in terms of responses, particularly in the industry – Batman v Superman: Dawn of Justice was deemed a disappointment; two directors left The Flash (Rick Famiyuma and Seth Grahame-Smith), and Ben Affleck decided to vacate the director’s chair for his Batman stand-alone film.

But things are slowly starting to “level out” and with acclaimed filmmaker Matt Reeves (War of the Planet of the Apes) now in pre-production on The Batman after taking over directing duties, fans are slowly getting their excitement back.

And it seems we may have our first little trickle of info on the new Caped Crusader if a tweet from Beauty and the Beast star Josh Gad is to be believed. Yesterday, the actor tweeted the following picture: 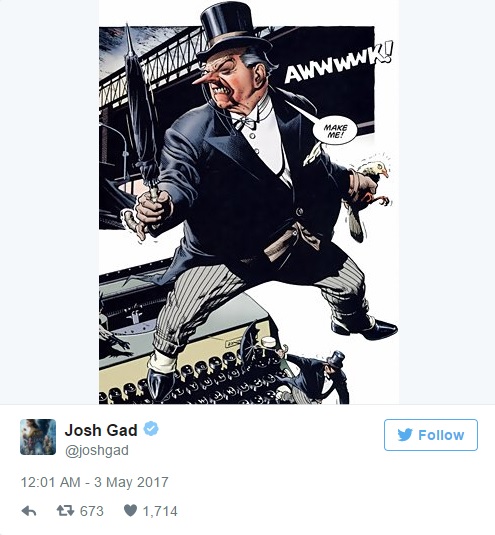 Could Olaf follow in Danny DeVito’s waddle and be playing The Penguin? It’s nothing but rumour for now, and it may just be Gad playing tricks on people, but this could be very surprising but very cool casting if true. No word on which villains will be used in the film – Joe Manganiello was due to play Deathstroke but that’s up in the air and Haley Bennett tweeted a photo of Catwoman a couple of months ago a la Gad so who knows. All we know is that we cannot wait to see the new Batman film.