Wonder Woman broke a record at the box office on its debut, becoming the biggest ever opening weekend for a female director.

Patty Jenkins takes the record from Fifty Shades of Grey’s Sam Taylor-Johnson, which grossed $85.1 million in 2015.

Wonder Woman took an impressive record breaking $101 million at the US box office this weekend, which is more than the likes of many Marvel films, including Guardians of the Galaxy and Logan. In terms of new releases, it beat Captain Underpants: The First Epic Movie which debuted in 2nd, while Pirates of the Caribbean 5 dropped to third. See the top 10 below via Box Office Mojo: 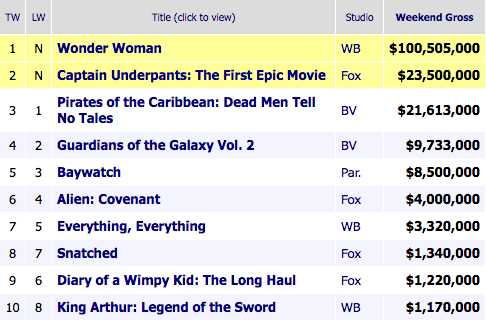 This is mainly thanks to the film’s wonderful reviews, including our very own which you can read below: