The first full reviews are in for Wonder Woman and they’re extremely positive, with the film scoring almost 100% on Rotten Tomatoes.

The iconic female superhero’s first solo movie is a hit amongst critics and has earned an impressive 96% score on the Tomatometer: 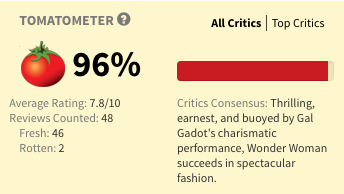 It’s great news for DC, after disappointing many with their most recent works, Suicide Squad and Batman v Superman. And it’s also looking good for the box office, as reports suggest that following these strong reviews, it could make over $100m in its domestic opening, which is almost double the original estimates:

Here’s a selection of some of the major outlet’s review quotes and ratings:

TheWrap: It’s a film that not only improves upon many of the seemingly built-in shortcomings of superhero movies, but also mixes smarts, sentiment and adrenaline in the best Hollywood style.

Hollywood Reporter: This origin story, with its direct and relatively uncluttered trajectory, offers a welcome change of pace from a superhero realm that’s often overloaded with interconnections and cross-references.