Wonder Woman looks set to exceed expectations at the box office, according to new reports. It was recently reported that the film would perform below-par, but following positive early reviews, the DC superhero blockbuster is now predicted to conquer the box office.

Early tracking had suggested that Wonder Woman would disappoint in its opening domestic weekend with an estimated $65 million, which would make it one of DC’s worst performing superheroes. However, according to BoxOffice.com, the film is now tracking “close to $100 million”:

“Strong social media buzz, generational awareness, and notable interest from women alongside the usual fan audience are driving our expectations beyond previously conservative levels. A domestic opening close to $100 million is looking more and more possible, and that may not even be the ceiling at this point.” said Shawn Robbins, chief analyst at BoxOffice.com. 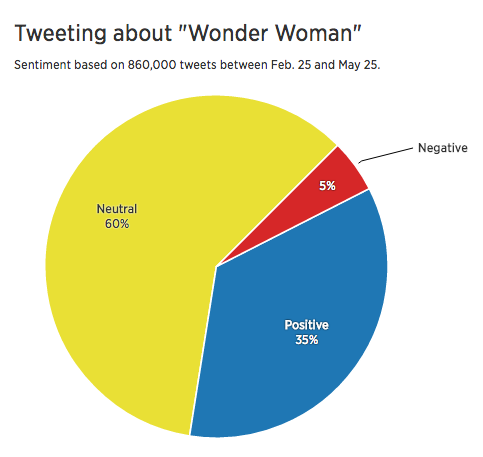 The early reactions have also helped, with critics in high praise, with one even calling it “the best DC movie yet”:

Everyone is asking me about #wonderwoman It's the best DC universe movie yet. Emotional. Funny. Light. @GalGadot is a star. ? @PattyJenks

While a Fandango poll named Wonder Woman the most anticipated film of the summer, ahead of Spider-Man: Homecoming and Pirates of the Caribbean 5.

So it’s looking good for the female superhero. Wonder Woman hits screens on June 2nd. Watch its trailer below in the meantime: