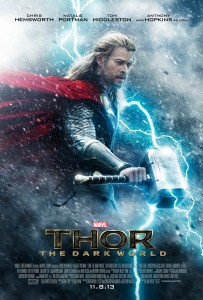 Although the weakest of the Phase Two movies, Thor: The Dark World still packs a punch and thrives on its character work. Directed by Alan Taylor, known for his work on Game of Thrones, the man was a good fit for the fantasy-based universe that the mighty Thor occupies, while Chris Hemsworth’s likeabilty gives our hero a relatable personality that belies his celestial origins. It all proves that this particular branch of the Marvel universe represents an ever-exciting territory for these increasingly huge movies to occupy.

Hot on the heels of a cross-dimensional firefight, Thor finds himself back in his home of Asgard for some peace and time to recollect on past victories. His earthbound romance with Jane (Natalie Portman) from the first movie has calmed him, and his wrestling with temporary mortality has humbled him; this Thor is a different God from the one we met two films ago, and his newfound serenity is a breath of fresh air for The Dark World’s proceedings. And for the most part, that seems to be a host of troublesome Dark Elves; led by Malekith (Christopher Eccleston), this alien army has awoken from an age-old slumber, and wants to throw the universe into eternal darkness. And with the help – reluctantly – of his brother Loki, Thor must find a way out of Odin’s lockdown on Asgard and put an end to the Dark Elves’ plans.

While the film’s special effects don’t have the whizzbang polish of MCU movies before and after it, this entry still moves along at a remarkably enjoyable pace. We zip to and fro between different planets (sometimes within the space of seconds, in the movie’s inventive climax) while character interplay becomes more delightful to witness than ever. Loki is more sly here than he’s ever been; he and Thor’s brotherly mistrust comes from a real place, and it’s this core relationship that will keep Thor’s movies bounding further out into the universe. Bring on Thor: Ragnarok.

Next in the MCU Diary: Captain America: The Winter Soldier