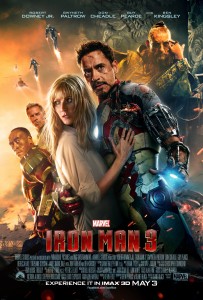 Director Shane Black and star Robert Downey Jr join forces to bring us a high-octane, detective-led story bursting with character-driven gags and meta-infused winks at the genre, set at Christmas time and featuring plenty of twists, turns, thrills and spills. I am, of course, talking about 2005’s Kiss Kiss Bang Bang – but there are some uncanny parallels to be made with 2013’s fresh, self-effacing Iron Man 3.

This movie arrived in the smoking wake of The Avengers; how could it do anything to make an impact of its own? The answer would be for writer and director Shane Black to have a bit of fun with the elements at his disposal. The plot is simple enough: The Mandarin, a new breed of terrorist, aims to bring down the US government with heinous acts of evil. His medium is TV: through that, his gritty images depicting horrific deeds gets inside the nation’s psyche. When Tony Stark’s bodyguard, Happy (Jon Favreau, who made the previous two Iron Man movies) is thrown into a coma at The Mandarin’s hand, it hits Stark right where he lives. Which happens quite literally, too; the ensuing chaos throws Stark onto a detective-like hunt to track down who is really behind The Mandarin, and uncover a dastardly plan that goes deeper than he ever imagined.

(Spoilers ahead) The answer to this neo-terrorist’s identity is absolutely fantastic; in a gigantic rug-pull that was a complete gamble on Marvel’s behalf, The Mandarin is revealed to be nothing more than an eccentric, harmless out-of-work actor by the name of Trevor Slattery (Ben Kingsley), a puppet controlled by bigger hands. If you’re precious about your comic book source material, then Iron Man 3 probably isn’t for you – but for the rest of us, it’s a refreshingly self-aware kick up the backside for a franchise that could easily have gone stale after The Avengers. And while we may not learn who the Mandarin really was by the film’s end (Guy Pearce’s character is just a front, if that Hail to the King Marvel One Shot is anything to go by), at least we got to find out what really makes Stark tick.

Next in the MCU Diary: Thor: The Dark World