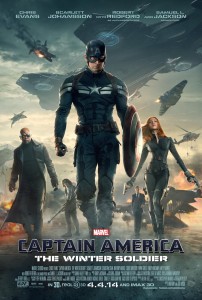 When directing duo Anthony and Joe Russo were spilling that Captain America: The Winter Soldier was being heavily influenced by ’70s thrillers such as Three Days of the Condor and All the President’s Men, it was met mainly with excitement, but also a few smirks. I mean, come on; Marvel Studios, a huge money-making corporation, making a paranoia-infused thriller akin to the classics of old? Even I, a fan of Marvel’s irreverent output so far (and at times, an apologist for their failings) had a tough time swallowing it. But then Robert Redford, old-school acting vet and star of both of the Russo brothers’ cited touchstone movies, signed on to appear in The Winter Soldier. It seemed they were really going through with this.

What followed is one of the best-loved, critically acclaimed films of the Marvel Cinematic Universe, a picture that could stand aside from its more fantastical counterparts as an engaging man-on-the-run flick. And as far as the plot goes, it’s the most thrilling we’ve yet seen, and bears huge ramifications for the world that Marvel had so carefully built up until then; Steve Rogers is still trying to find his feet in an America he buried himself in ice for over 70 years prior, and S.H.I.E.L.D. – the security agency he’s now a hired gun for – is keeping secrets from him. Terms like ‘compartementalisation’, familiar to our ears, are thrown around to keep him out of the loop, something the Captain doesn’t like one bit. After proving himself too dangerous to keep on the payroll, Alexander Pierce (Redford), head of S.H.I.E.L.D., orders a manhunt to bring him down. But Rogers has other plans: with the help of Black Widow, he aims to uncover some huge secrets about the organisation and try and restore some kind of balance to the America he gave his old life to save – even if that means bringing up old ghosts in the form of the Winter Soldier himself.

Captain America: The Winter Soldier represents a more adult Marvel Cinematic Universe, and that’s where the least good parts of the film fall foul; despite the gritty action sequences and chase scenes, we’re constantly reminded that this is still a Marvel movie. Case in point: during a thrilling bare-knuckles breakout from S.H.I.E.L.D. headquarters, Cap finds himself facing a huge computer-generated heli-vehicle, which he takes down in routinely absurd fashion. But that’s by the by: accept this great movie for what it is, and you’ll engage with its sly political observations and quickfire humour.

Next in the MCU Diary: Guardians of the Galaxy

One comment on “The MCU Diary – Captain America: The Winter Soldier”