#10: Guardians of the Galaxy 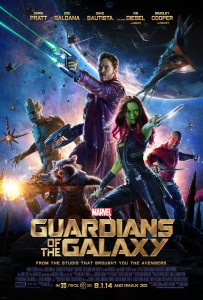 Guardians of the Galaxy should never, ever, ever have worked. Try a million different parallel universes, and this bizarre attempt from Marvel would have ended up a wrongheaded mess of ill-defined humour and tonal dissonance of planet-sized proportions. Thankfully, director James Gunn ran with the idea of a sentient tree, a talking raccoon, weirdly-hued assassins and a lead character with some serious mommy issues, and he made it all the way to the other side of the Galaxy.

Which is where we find ourselves for the most part of this energetic, fantastically realised slice of pop-culture-gone-mad. After a brief stint on Earth outlining Peter Quill – AKA ‘Star Lord’ – and his backstory of being stolen from his home planet, we’re whizzed 26 years into the future and into deep space. And deep space, it would seem, is a remarkably colourful place: if someone’s not out to kill you, then they’re out to rob you, and Quill has grown up learning this all too well for a Ravager. Picking up a mysterious orb from a desolate planet, Star Lord is thrown into an intergalactic crossfire as numerous parties try and nab the mysterious piece back from him – and he joins forces with the aforementioned Rocket Racoon, house plant-slash-muscle Groot, emotionally volatile headhunter Gamora and the metaphor-illiterate Drax to keep it from falling into the wrong hands. They’re a funny-lookin’ team, but they’re exactly the kind of saviours the Galaxy needs.

Although the screenplay moves in well-defined (and overfamiliar) motions, Gunn loads his characters with the funniest lines this side of the Quadrant; if it weren’t for its Star Wars-inspired spirit for adventure, it may have ended up as Marvel’s first straight-out comedy. But not only is it funny, it’s also packed with genuine heart – and is the best-looking Marvel film to date. As Erin Free of FilmInk put it in his original review, ‘You’ve got to gamble big to win big’; clearly, Marvel’s roll of the dice struck out lucky.

Read our review of Avengers: Age of Ultron – the next film in the MCU.