Back in November of last year, a spectacular fan edit by the name of Django Rechained was unleashed. Acting on their deep-seated niggle with the 2012 movie’s host of structural problems, Kellen Phillips –  a filmmaker and lecturer – re-edited the entire of Quentin Tarantino’s Django Unchained to fix their perceived problems with the movie’s pacing, as well as its indomitable running time of 2 hours and 45 minutes. Rechained runs (relatively) leaner with 27 minutes removed, and not only are there chops and changes to be found in almost every scene, but the inherent structure of the film is also significantly different. Now that some time has passed to properly digest the changes, I can confidently declare that Phillips has done an incredible job; his fan edit is an art unto itself, and his understanding of cinema bleeds into every choice he’s made here. It’s a really stellar effort. However, his ambition to improve Tarantino’s film has only resulted in making an altogether different one.

To explain what I mean exactly, I’ll need to describe the most noticeable differences in Phillips’ edit  when compared to the original –  which include huge spoilers if you still haven’t seen Tarantino’s offbeat Western (and I recommend you watch the fan edit, if you’ve got some time to spare). Firstly, the opening scene in Rechained is now the sequence where Dr. King Schultz (Christoph Waltz) signs off the money for Broomhilda’s sale, the wife of Django (Jamie Foxx), from racist ranch owner Calvin Candie (Leonardo DiCaprio). We then witness the deaths of Candie and Schultz in quick succession, including a few other supporting players, before being flung into that delightfully bloodthirsty shoot-out around Candie’s mansion. A few moments later, we then find ourselves in familiar narrative territory, flung back in time to the the first scene from the original Unchained where Django and Schultz first meet. 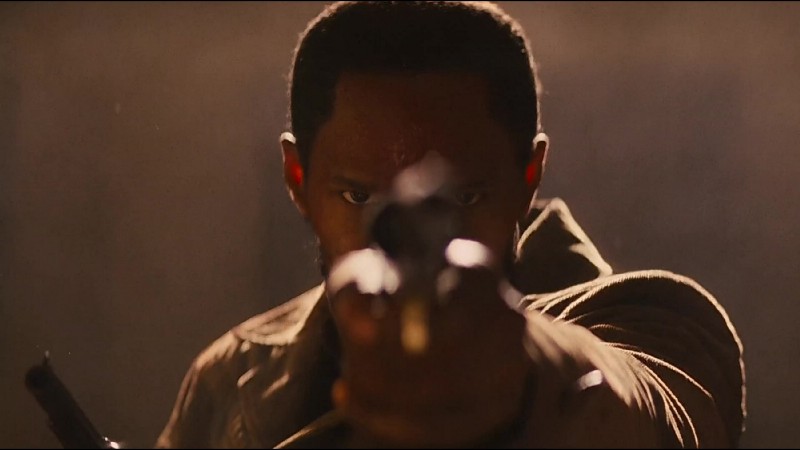 By using a scene that was originally placed late in the movie, Phillips drops us straight into the middle of things within the precious first few minutes, injecting an instant oomph to the narrative and thickly laying on the mystery as to who these exciting people are, and how they wind up where they do. To me, the real mystery is why Tarantino didn’t decide to juggle his otherwise straightforward storyline like this in the first place; after all, as Pulp Fiction and Reservoir Dogs both prove, he built his career on forging narratives that played with audience expectations of scene placement, even going as far as to introduce a character’s death before they had even finished their part in the story. Even one of Tarantino’s first screenplays, the original version of True Romance, began life like this (before director Tony Scott eventually ironed it out into a linear structure). But back to Rechained; there’s actual weight to Schultz’s death now, since we’re armed with the knowledge of his impending doom. In the cut by Tarantino and Fred Raskin  –  his editor  –  Schultz is essentially thrown out of the story like a trash bag, intended to give dramatic heft to the film’s final. In Tarantino’s version, his death is an afterthought. In the fan edit, it’s operatic.

But while these changes have ‘fixed’ things I myself had problems with, I couldn’t help wondering if they took something unique away from the crazy-ass movie we did get. Despite my enjoyment of the newfound vigorous pace, I couldn’t help but admit it was now a different beast  –  subtly so, but definitely altered. The characters were the same, the story was the same, but via the shifting of perspective that the hugely complex art of editing and writing affords, the core essence of the movie had somehow been transformed. It’s a fan edit with only the best of intentions, but is it begs the almighty question: is it truly any longer a Tarantino picture? 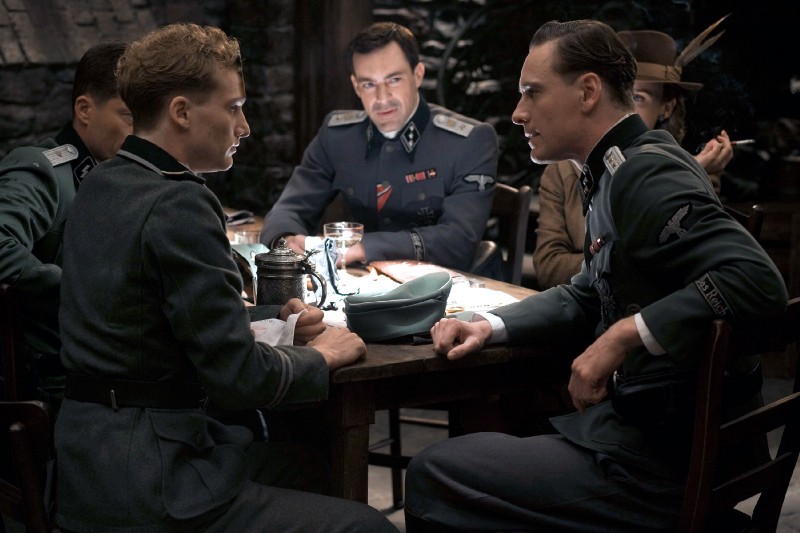 While I find much to admire in his last three movies  –  Inglourious Basterds, The Hateful Eight, and indeed Django Unchained  –  they are each victims of the director’s proclivity for indulgence. Scenes will spill out into mini-movies in themselves, the dialogue of characters unspooling like a never-ending rope of handkerchiefs from a clown’s mouth. And while it’s admittedly enjoyable to follow these intricate tapestries of cadence and inflection, our patience is consistently worn thin. The ways in which our expectations of where a particular scene is headed is regularly overhauled, the introductions of fresh conflicting factors (remember the tavern stand-off in Basterds?) entertain as much as they exhaust. It’s a curious blend of patience and pay-off that’s taken firm stead in the filmmaker’s recent output, and while I yearn for a day where Tarantino reels it in and makes another lean, mean 90-minute thriller like Reservoir Dogs, I’ll take the good with the bad. However, a filmmaker’s identity on celluloid has little to do with actual length, at least in any quantitative form. When you hear someone complain about a film that’s ‘too long’, it’s typically not because that movie’s running time is too weighty, but because its pacing isn’t as good as it could be. You’ll know fully well that sometimes, three hours absolutely fly by, while ninety minutes can feel like an eternity; it all depends on the quality of the pacing, your involvement with the characters and the story, and of course, the editing that binds, complements and enforces them all.

And somewhere inside Django Unchained’s unruly eternity, I’ve always felt there’s a great film buried. Phillip’s fan edit initially seemed like a map to find that great film ,  but it revealed something far more important to me, which is that art comes not just from the strengths of its creator, but also their weaknesses. Remember that optimistic saying, that you ultimately love someone for their imperfections? I believe the same can be said of films and the people who make them; some of the planet-based sets on Star Trek: The Next Generation look dreadful, but the important stuff  –  the writing, editing, performances, etc.  –  is usually top-notch. As a result, those bad sets become endearing to me, as opposed to off-putting. When the T-100 operates on himself in The Terminator, I’m not convinced for a second by the rubbery monstrosity that stands in for Arnie’s head . But again, the movie is so good in other places, its inclusion becomes something I actively look forward to seeing with each viewing of the movie. In enjoying the plain badness, it adds colour to what is genuinely great. Like people, movies aren’t perfect –  and realising they share such similarities and embracing a warts-and-all approach is imperative in opening yourself up to a deeper appreciation of the artform. 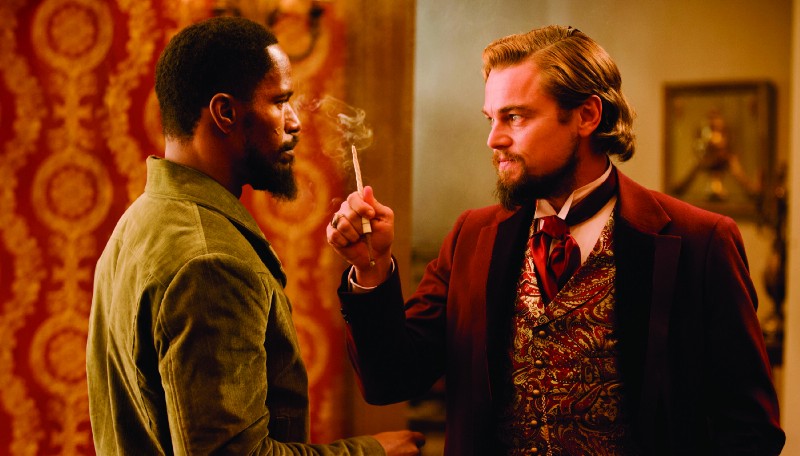 And yet, we find ourselves arguing all the time about the things we would change about movies, even in the films we love most  – but I don’t think we would actually take action on those instincts. To wheel out a much-abused punching bag for millions of filmgoers, Jar Jar Binks doesn’t have that many fans ,  but given the chance (and the original negatives), would you find it in your heart to edit him out as much as possible from The Phantom Menace? Cut down his number of lines to the bare minimum, keeping the plot as undamaged as you could? I think plenty of you would try ,  and that would be fine. But you’d also be eliminating a portion of George Lucas’ vision, a vision which – for better or worse – all adds up to the movie he intended to make. Like the Star Wars prequels which have been repurposed into plenty of condensed fan edits, all our favourite bits are there, and the imperfections are left to the wayside. While it’s difficult to view those imperfections as, over time, aspects we’ll come to accept as part of the whole package, we’re potentially denying ourselves a richness that any streamlined version could provide. (Yet given the hindsight of the seventeen years since The Phantom Menace’s release and the still-burning hatred toward the character, Jar Jar Binks was probably the worst example I could have used here.)

Still, these are arguments about content, not form. Jar Jar is but a single character; the complaints angled toward Django Unchained concerned its languid length and pacing (plus a staggering number of uses of the N-word), aspects which run through the movie from beginning to end, and far more difficult to grapple with in an edit room. Still, Rechained shows an attempt regardless; as well as the reshuffling of the shootout from near the end of the movie to right at the beginning, there are other smart changes. A scene in a restaurant is spliced together with Django, Schultz and Candie riding to the Candieland ranch, the bare necessities from each sequence forming a neat package of exposition and character shading. In fact, most scenes seem to be tampered with in some way, with at least a few trademark lines of tangential dialogue snipped away, leaving us with a narrative reshaped into a more economic storytelling model. Not only that, but according to Phillips’ description accompanying his edit, he also removed some of the ‘excessive’ violence –  something I didn’t personally detect upon viewing. Once you start taking away the blood and guts from Tarantino, I get to thinking ’bout that all-important question yet again. Is it any longer a Tarantino picture? I hasten to answer: I don’t think so.

Once you start toying with movies, they inherently become different films –  for better or for worse. And that’s my key point: Django Rechained is a fine movie, hugely entertaining with great narrative momentum, while forgetting what makes its characters tick. The original Unchained, on the other hand, is dense, filled with memorable character moments, while dragging itself down under its own weight. Films belong to the filmmakers during their creation; when they’re out in the world, it’s up to us to experience them any way we wish . And if that includes deconstructing them via conversation with friends, to literally deconstructing it piece by piece in your own edit, then so be it. Just make sure you accept they are now two different films, and as such, they both deserve to be judged on their own terms.

You can watch Django Rechained here.