The first reviews are in for the Power Rangers movie and they’re not looking too good.

Ahead of its release, Power Rangers has received mixed reviews so far, scoring an unimpressive 50% on Rotten Tomatoes: 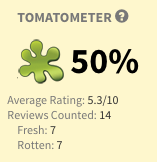 There’s still plenty more reviews to come in for the highly-anticipated reboot, but so far the big outlets have not been too kind on the film, check out their review scores below:

Recently, it was revealed that the movie had made history with the first openly gay big screen superhero, being Yellow ranger Trini. However, that hasn’t helped the reviews it seems. Power Rangers arrives on 24th March and you watch its trailer below: