Guy Ritchie’s King Arthur: Legend of the Sword had a disappointing opening weekend at the US box office.

Warner Bros.’ action epic massively under-performed on its debut, with a budget of approximately $175 million, the film has so far taken only $14.7 million in North America.

It’s no huge surprise though, as it was predicted to struggle. And following poor reviews, it could be set to be the year’s biggest flop.

It took third place in the standings, with Amy Schumer’s new comedy Snatched snatching second, Guardians 2 remained at the top of the chart. See the full top 10 below via Box Office Mojo: 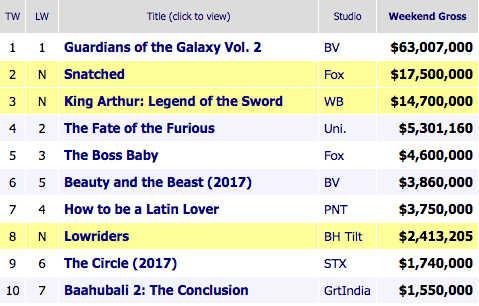 It’s bad news for Guy Ritchie, as King Arthur will be his second flop in a row, following 2015’s The Man From UNCLE, and next up for the British director is Disney’s live-action remake of Aladdin.

Read our King Arthur review here and see its trailer below: