Reviews are shooting in for John Wick: Chapter 2, and so far they’re generally very positive. The first film proved popular in 2014 and now the sequel seems to be following suit.

There’s still plenty of outlets yet to release their review of the film but with some already giving their verdict, it’s clear to see that the sequel is being well received. Check out a few of the review scores below:

While it also has an impressive score on Rotten Tomatoes: 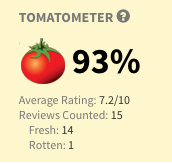 John Wick: Chapter 2 hits theaters on February 10th and based on the reviews so far, it certainly looks worth a watch. Check out its Super Bowl trailer below in the meantime: