What’s the worst movie of 2017? Some might say Fifty Shades Darker. Others would say Transformers: The Last Knight. However, few films have garnered more universal hate than The Emoji Movie. While most of us suspected Sony had another dud on their hands, nobody expected it to be this bad, especially in a golden age of animation. A 12 on Metacritic! 10% on Rotten Tomatoes! 2.1 on IMDb! 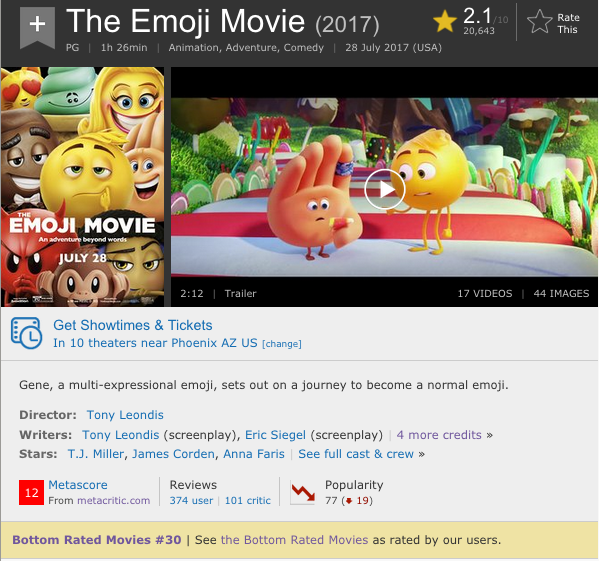 Speaking of which, The Emoji Movie currently sits at #30 on IMDb’s Bottom Rated Movies, behind the likes of Birdemic: Shock and Terror, The Hottie & the Nottie, and Superbabies: Baby Geniuses 2. Wait, so does that mean The Emoji Movie is the worst rated animated feature of all time? Well, it depends how you look at it. If we’re talking about animated features that were made by a major studio and received a wide theatrical release in the US, then yeah, The Emoji Movie is as bad as it gets. If we’re talking about animation on the whole, however, there are actually four movies that are even worse, at least according to IMBb. Here they are:

The Legend of the Titanic

The idea that there’s an animated knockoff of 1997’s Titanic is already offensive enough. What makes this Italian animated film especially cringe-worthy, though, is that it also works in a giant octopus, an evil whaler, and criminal sharks that were responsible for sinking the Titanic. Oh, but don’t worry. Everyone makes it out alive!

This 2008 Hungarian film was apparently supposed to be a sequel to 1981’s The Little Fox, but it looks more like a mockbuster along the lines of Chop Kick Panda or A Car’s Life: Sparky’s Big Adventure. For the record, the two aforementioned films didn’t make IMDb’s Lowest Rated Movies, but that’s probably because they’ve only accumulated a couple hundred votes each. As for A Fox’s Tale, it’ll forever be a mystery how this vomit-inducing animation managed to attract Freddie Highmore, Miranda Richardson, and Bill Nighy for its English cast. All that can be said for sure is that if this were a student film that was made in a day with no budget, it would still be grade F junk.

Titanic: The Legend Goes On…

As if one animated Titanic movie wasn’t enough to make us lose faith in humanity, there are actually multiple shipwrecks among IMDb’s worst of the worst. While some would argue that the later Titanic movie is even worse, The Legend Goes On still sets the bar pretty low with repulsive animation, stereotypical mice, and – god help me – a rapping dog. I’m not making this up. James Cameron might’ve taken some liberties when he made Titanic, but this is the equivalent of taking a sledgehammer to history!

Currently the lowest rated animated abomination on IMDb, Foodfight! brings together the likes of Charlie Tuna, Twinkie the Kid, and other third-rate brand mascots. The obvious product placement is the least of this movie’s problems, however. That distinction goes to the painful sexual innuendos, animation that wouldn’t have cut it on the Nintendo 64, and the presence of Charlie Sheen. It’s hard to say what’s more depressing, that this bomb cost $45 million to make or that a distant relative of Walt Disney supposedly provided additional voices. 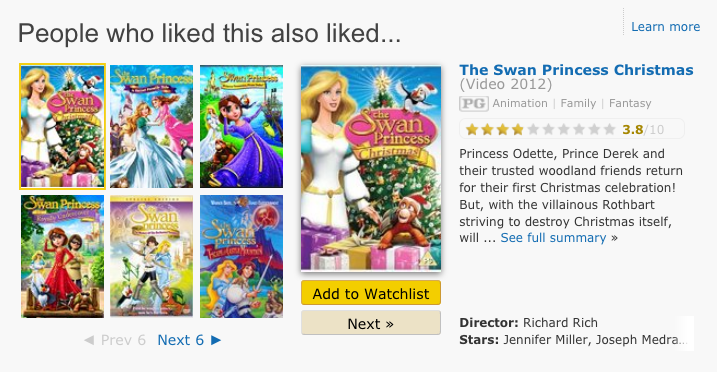 Oh, and on a side note, apparently the poor souls that actually like The Emoji Movie also liked most of the straight-to-video Swan Princess movies, which actually have higher ratings than Sony’s ultimate stinker.