After Spider-Man took the box office crown last weekend, this week it was the turn of Caesar to reign supreme with the third film in the new Planet of the Apes jumping straight into the top spot at the US box office.

Spider-Man: Homecoming dropped 61% in its sophomore weekend, bringing in $45.2million for a domestic cume of $208.4million. The film has so far grossed $469.4million across the globe.

In other superhero news, Wonder Woman continues to soar with another $6.9million added for a $380.7million domestic total, and will this week pass Guardians of the Galaxy Vol.2 as the top-grossing superhero film of the year in the US.

Outside of the big films, Amazon Studios’ romantic comedy The Big Sick continues to impress, earning $7.6million on its nationwide expansion this weekend. Currently, the film stands at an impressive $16million since it started its run on limited release at the end of June.

Here’s the top ten in the US via Box Office Mojo: 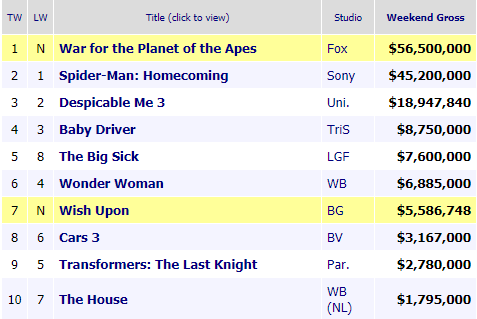