Germans are not particularly renowned for their comedies, but this year, they’ve arguably presented the very best in the genre. This Maren Ade, Oscar-nominated movie does what most timeless comedies do – combine the playful nature of the film with a somewhat tragic undercurrent, as while this film will undoubtedly have you in stitches – it may just make you cry too. Clocking in at just under three hours, to maintain its humour throughout is of great commendation to. Now, here comes the inevitable Hollywood remake….

Last year Deadpool took it upon itself to ridicule and deconstruct the superhero genre – yet all the while, it was very much of that genre. There’s less obligation for Chris McKay however, as he pokes fun at Batman, with the freedom to be as irreverent and downright absurd as he pleases – and it’s a licence he most certainly takes. Collecting great comic talent in the form of Will Arnett, Michael Cera, Zach Galfianakis and Jenny Slate, we really would be happy if every movie was made out of Lego.

So while the Germans may not be renowned for it, comedy is exactly where Britain thrives – and yet there haven’t been too many memorable features to derive from the UK in recent years, particularly not featuring new, original creations anyway. So step forward Mindhorn, played with a brilliant conviction by Julian Barratt, in the story of an ageing thespian who has to solve a real life crime, in the modern day, in the character of Mindhorn, a cop from a cheesy 80s detective show. It’s as gloriously absurd as it sounds.

Talking of absurd, they don’t come much stranger than Colossal. A film that could technically be in several categories, moving between genres effortlessly. But the one consistent is the humour, as this irreverent, bizarre story delves into the life of a woman who, when drunk, finds herself controlling a gigantic robot causing havoc in Korea. Anne Hathaway, Dan Stevens and Jason Sudeikis star, and while the latter is the most comedically experienced of the trio, he’s actually the darkest thing about this.

The Other Side of Hope

I know what you’re thinking, how could a film about the on-going refugee crisis be classed as a comedy? Well, somehow Finnish director Aki Kaurismaki has managed it, with a laugh out loud endeavour that has an indelible, deadpan approach not too dissimilar in that regard to the likes of Napoleon Dynamite. Utilising the archetypal, Scandinavian dark humour – the film is peppered with a profound backbone which makes for such great cinema, but honestly, there are still plenty of laughs to be had. 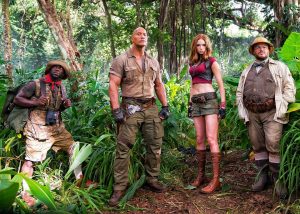 Based entirely on real events, stand-up comic Kumail Nanjiana and his wife, Emily Gordon, had to go through a difficult ordeal when the latter went into a coma when they had first started dating. Luckily she was okay, and the pair have co-written this amiable picture together, and while Nanjiana plays himself, Zoe Kazan has been hired to play Gordon. It’s a rom-com evidently influenced from When Harry Met Sally, and when in this particular genre, there’s no better place to draw from.

Often heist capers struggle to triumph in both the comedy and action elements, as one is so often compromised in the process. But then again, this is a heist caper presented by Steven Soderbergh – so suddenly our interests are piqued, and confidence levels raised. What also helps is having Adam Driver and Channing Tatum in the lead roles, of two brothers vying to pull off an ambitious robbery. We’re sold.

Goon: Last of the Enforcers

Goon was one of the real surprises of 2011, and so has deservedly got itself a sequel. Seann William Scott returns as the lead role of Doug Gatt, and he’s joined with a brilliant cast, as the likes of T.J. Miller, Alison Pill and Live Schreiber make up the ensemble, with Jay Baruchel on directing duties for the very first time. To be honest, we’ll just happy if we see Scott beat the crap out of everyone with a hockey stick again, and something tells us we’re not going to be disappointed on that front.

Sally Potter’s latest production The Party has a runtime of 70 minutes (thank you) and a cast consisting Patricia Clarkson, Cillian Murphy, Kristin Scott Thomas and Timothy Spall. What’s not to love? This charming, satirical comedy bears a resemblance to Abigail’s Party, blending this surrealist wit with kitchen sink realism, to make for an engaging watch.

Jumanji: Welcome to the Jungle

Now you may wonder what this is doing in a list of comedies to look out for, but it seems that Jake Kasdan has taken a rather playful route with this reboot of the classic Robin Williams production. What helps matters immeasurably is having Kevin Hart on board, who it’s hard to imagine will be playing it straight, while there’s also a role for Jack Black – again proving how light-hearted this title is set to be. Plus, it has future President of the United States Dwayne Johnson in the lead, and he’s one of the funniest actors working today. So there we have it, a comedy it is.