I love practical effects. I also love CGI, when it’s done right. Truly great effects can transport you further into the world of the movie, helping to create living, breathing characters in-frame who are as tangible as the actors they’re appearing next to, whether it be the binary wizardry of Gollum in The Lord of the Rings, or Jeff Goldblum’s slimy, grimy real-effects transformation in The Fly. But you know what I really love? Dinosaurs. Big, hulking, beautiful dinosaurs, ambling about and roaring like nobody cares, who sometimes try to eat Jeff Goldblum in Steven Spielberg’s 1993 family adventure movie Jurassic Park. I rewatched the movie recently in the wake of all the hype surrounding its third sequel, Jurassic World (you mean you haven’t yet?) where our 65 million-year-old friends get up to no good once more – and something struck me more than any of the other million times I’d seen it. 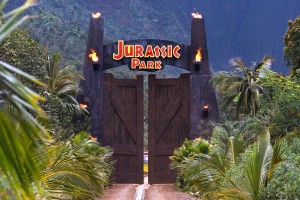 Jurassic Park really helped boost CGI in a big way for blockbusters, masterfully blending it with the practical effects to fill in the gaps, as it were (this is especially the case with the night-time Tyrannosaurus Rex sequence). But there’s one scene in particular that hit me as particularly moving and memorable – and there were none, or at the very least minimum, computer effects used in it. It’s the moment when Ellie, played by Laura Dern, runs over to a Triceratops in the tall grass; after being wowed by the beauty of the gentle beast, she realises that the creature is in pain – and it looks it, too. With the Triceratops writhing in agony, and Dern’s wonderfully expressive face helping us along, we’re drawn completely into the scene, and end up caring deeply about something that has been extinct for a near-incomprehensible amount of time. Why is this? Because the Triceratops is actually there; it’s physically in the scene, with Stan Winston’s incredible animatronics reacting to Dern in the shot. It’s a heartbreakingly vulnerable moment, and it works because your brain – the smart thing that it is – recognises the effect as real. And that’s because it actually is. 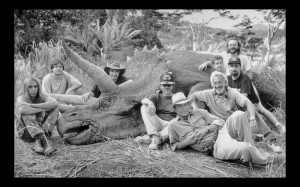 This astonishing scene is mirrored somewhat in Colin Trevorrow’s Jurassic World, which is still dominating the worldwide box office as we speak. When Chris Pratt’s character, Owen, approaches a horizontal Apatosaurus (spoiler warning), we see that It’s just been ravaged by the loose Indominus Rex which is wreaking havoc around the park; what you see are its eyes looking upward at Owen and Claire (Bryce Dallas Howard), terribly hurt and dying from its wounds. As far as I can tell, the dinosaur’s head is a practical effect, potentially with a touch of gentle CGI accentuations to its expressions blended expertly in. What entails is a remarkably tender moment, one that almost brought tears to my eyes the same way the Triceratops did in Jurassic Park, and one that I would class as a genuinely magic movie moment (the ever-rare Triple-M). Perhaps my emotions were somewhat compensating, as the scene is placed in the middle of a film that’s dominated by polygons and ones and zeroes, and gigantic computerised set pieces rather than quiet moments like this one. Regardless, it stands out, and it stands out for a reason. 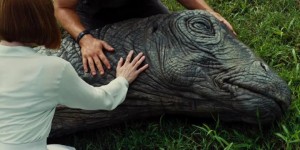 If the rest of Jurassic World were like this, then it may have gotten close to the original’s brilliance. Yes, the computer generated effects are top of the range, for the most part. But that’s all that our brains register them as: effects. Not reality. There’s an intelligent meta-commentary on sequelitis bubbling under the film’s surface, too; it’s a movie that’s much more than a dumb action flick. Jurassic World is a fun adventure thriller, and I wouldn’t hesitate taking my own kids to see it (if they existed) – but there’s one movie I’d show them first.