You know the argument: CGI has taken over today’s cinematic landscape, delivering special effects that either toe the uncanny valley between comfortably artificial or creepily real, or taking precedent over any ‘real’ action taking place in the movie. And it’s true, by and large; as well-crafted as Avengers: Age of Ultron might be, it’s no match for suspense and visceral action as John Wick is – and don’t even get us started on the Transformers movies. But that may be somewhat of an unfair comparison; John Wick, and flicks like it, aren’t relying on gigantic set pieces to get them through the story, relying instead on close-quarters action where the film’s budget can comfortably meet the filmmaker’s imagination half-way. But I’m here to celebrate the absolute triumph of a new movie that’s out, where a well-realised, creative grip on computer generated imagery actually serves the movie’s action, not hindering it. I am, of course, talking about Mad Max: Fury Road. These are three examples explaining why the film uses CGI well, and how future movies could learn from it.

In arguably the first proper action sequence of the film (but let’s be honest, all of Fury Road is an action sequence), we witness Max Rockatansky (Tom Hardy), Imperator Furiosa (Charlize Theron) and Nux (Nicholas Hoult) hit the gas and shoot straight into a raging dust storm, filled with lightning-charged tornadoes and whipping tendrils of sand. And that’s the key word here: witness. We don’t merely watch these awesome events unfold, like we would if Optimus Prime were to tumble across the screen in an explosion of sparks and pretty lights for the millionth time – we actually feel ourselves fully invested in what’s happening. The dust storm itself may have only ever existed on computer chips, but Fury Road director George Miller and cinematographer John Seale treats this sequence like a lush painting: 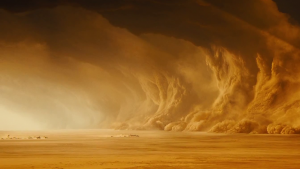 The camera slowly pulls back, showing the imposing magnitude of this terrifying force of nature against the tiny dots which happen to be the group’s vehicles. This is a prime example of using CGI as part of your movie, and not as the prime ‘look at all this production value’ focus. And even when we’re inside the actual dust storm, that principle doesn’t change; even while the visual effects lash at the screen, there’s always a focus, always a narrative to guide us through and give genuine spectacle and scope – important aspects that most modern big-budget pictures mistake as throwing money at the screen.

The reason CGI was used originally was to fill in for stuff that couldn’t be actually filmed in-camera, or for something that physically didn’t – or couldn’t – exist. Take the first Jurassic Park movie as a prime example; a beautiful blending of practical animatronics with computer-generated beasties filling in for the unbuildable moments (that moment we first meet the dinosaurs, for instance). But the ratio was always healthily geared toward effects that happened in-camera – and you don’t need to look far to see that same practicality, that same headspace, being utilised today. Probably the biggest name in blockbusters today, Christopher Nolan has risen to the fore of commercial and critical circles not just for his insane narratives, but for the way he always attempts to achieve something in front of the camera before relying on computers. The director will crane a 52-foot spaceship rather than airbrush it in; he’ll opt to suspend Joseph Gordon-Levitt from wires and throw him down a revolving corridor, and then cut them out with programming later. And that, my dear readers, is the point: CGI is best used when it’s hiding the strings.

Think of it as a type of magic: you’ll witness something extraordinary happen for real, and wonder how on earth it did. Mad Max: Fury Road does exactly the same – most of its stunts, explosions and other myriad craziness happens for real, and for safety, logistics, and other important things like that, small moments like a body flying off a car that’s hurtling through the air at many mph is a CGI creation. Replace that with, let’s say, Kevin James in the trailer for Paul Blart: Mall Cop 2 who has been superimposed into the frame, being knocked back by a CGI horse; it isn’t going to pack as much oomph. (Okay, it’s a comedy, not an action movie. But that effect still needs to feel real, still needs that visceral nature, to be funny. The last decade has been awful for slapstick, thanks to visual effects). So what’s the lesson here? Fundamentally, at least one of these elements has to be real. You’re supposed to fill in the gaps; hide those wires. You’re not supposed to see the magic. Miller packs Fury Road with these in-between effects, but they’re woven seamlessly into the practical ones – letting us actually feel the danger in each increasingly extraordinary chase scene.

Reason 3: Effects that Fit the Tone

Something that many, many filmmakers seem to decidedly ignore, when it comes to CGI, is the tone of their movie. Nailing a film’s tone is deciding on whether your film will live or die, and the attitude in today’s climate seems to fall upon CGI as a solution for every problem that comes up. Fury Road, even when it’s caught up in CGI wizardry thanks to the amazing team at iloura (the company behind the film’s computer effects), makes sure that every moment of twos-and-ones carnage still fits within the world that’s been so delicately crafted in front of the camera.

Over the years, the perceived ‘correct’ amount of CGI used in specific genres has changed. Fury Road is many things, and can’t be pigeonholed – but you would certainly choose it for an action movie marathon night. The action movie never relied on special effects, opting for the low-to-medium budget route to provide its thrills and spills. But that’s evolved; Transformers: Age of Extinction falls under the ‘action’ label most comfortably, and is positively brimming with CGI in almost every frame. As for other genres, science-fiction has always relied on special effects to bring extraordinary visions to the screen; drama and comedy never have done. And yet, we’re seeing more and more being used in Adam Sandler-powered fare such as Grown Ups 2, films made by people who think that we will somehow be tricked into believing that some genuine, good ol’ fashioned slapstick is causing pain to the characters pulling ‘YEEEOWWWCHH!’ faces. And yet, the brain will always know if what it’s seeing is real or not, therefore destroying a comedic moment. Meanwhile, the film’s tone comes crashing down. 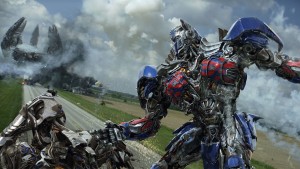 Fury Road, on the other (mechanised) hand, gets it completely right. Nothing that is heavily imbued with computer generated imagery in the movie feels out of place, or shows something that couldn’t happen within the world of that particular film. Even if that couldn’t actually happen in reality, we’re led to believe it could happen within Max’s world. This extends to other movies: The Hobbit series is awfully heavy with CGI, but its visual effects are used to build a world we believe in, not to lie on the top and look pretty. But it’s not all happy, as even some of our greatest directors are liable to ruin their film’s tone with awful, wrongheaded digital artistry: David Cronenberg’s dark comedic drama Maps to the Stars was up there with last year’s best films, its creeping dread oozing out of nearly each of its increasingly sardonic frames. And then, right near the end of the film (spoiler warning), some truly, truly terrible fire effects during one character’s suicide threatens to ruin everything that’s come before (and how about Let The Right One In’s infamous cat scene?)

This is all what I fear most about films like Jurassic World and Terminator Genisys. If the trailers are anything to go by, and they probably are, both films are going to take the worlds built so well by classic movies, brought to life by their brilliant in-camera effects, and turn them into something we’re never going to feel fully invested in, due to all the points I’ve made above. Thank the movie gods, then, for George Miller and Mad Max: Fury Road, for showing us that CGI is a fantastic tool at the filmmakers’ disposal – but one to be respected.

One comment on “3 Reasons why Mad Max: Fury Road proves that CGI could become good again”