The end of the month sees T2 Trainspotting chugging into a station near you. I’ve no idea why I used a train metaphor, because as you’ll know, 1996’s seminal Trainspotting has almost zero to do with this particular form of transport, or indeed the curious hobby of collecting and collating notes on them. The movie in fact is a nightmarescape of drug use, its heightened reality stylised to such a degree that British cinema got a kick up the backside and saw many imitators aping it for years afterward. In the lead-up to its bonkers-looking sequel, everyone I’ve spoken to seems to love Trainspotting, and so they should. But twenty-one years after its first release, approximately ten years since my first viewing of it, and two months since my re-watch, why don’t I love it too? 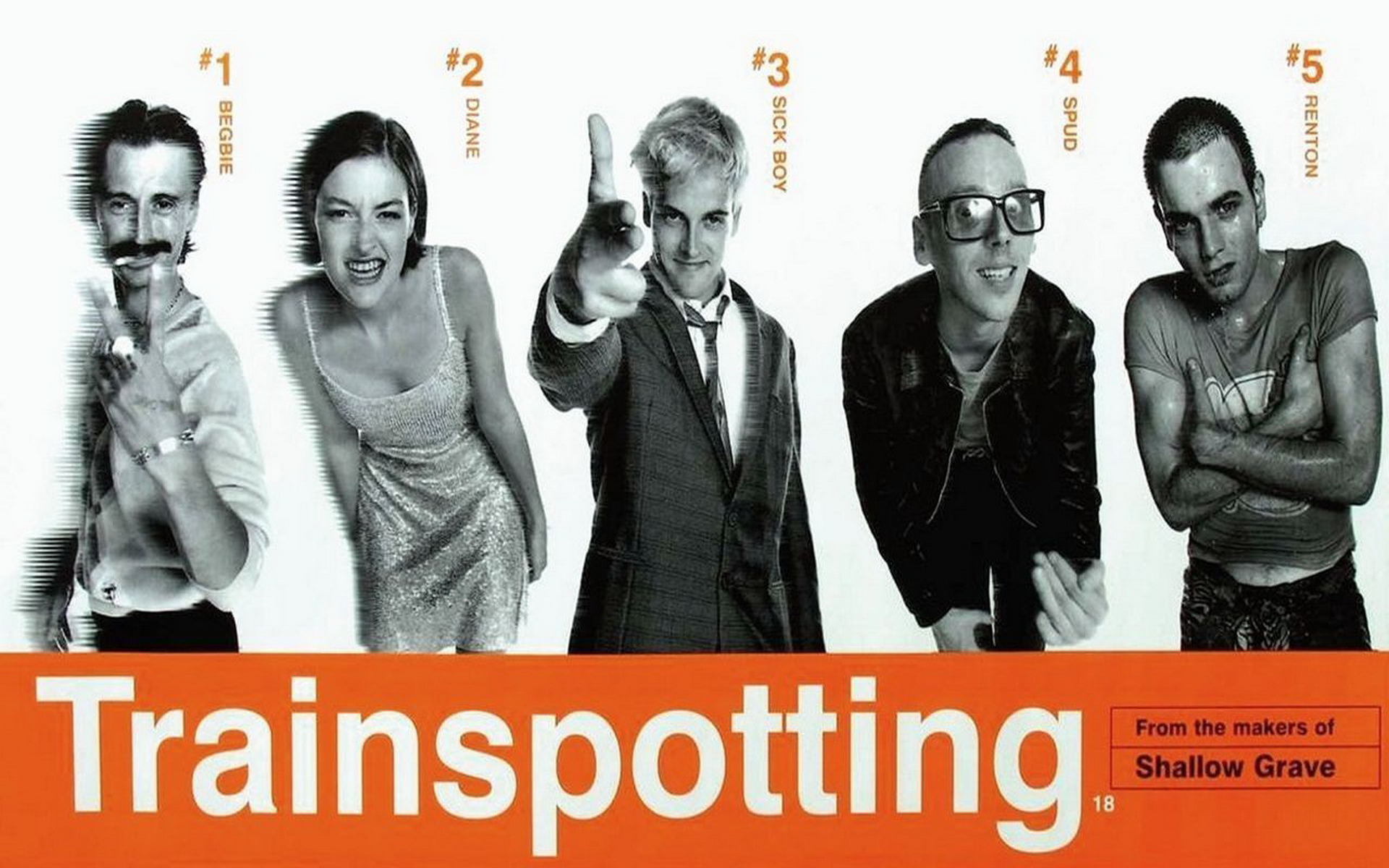 You know the poster: Begbie. Diane. Sick Boy. Spud. Renton. Orange background. Its stark, humorous and self-aware iconography was only embedded deeper into the filmgoing psyche when the movie itself came out, 94 minutes depicting the grubby lives of a handful of Scottish nobodies who wasted their lives by wasting themselves physically. Renton’s opening monologue (a demon-grinned Ewan McGregor) spoke to a generation with clear-eyed relevancy, while director Danny Boyle’s innovation turned Irvine Welsh’s novel into an absurdist rat maze, the boundaries of his beautiful sets – which folded inwards and opened up much like a stage play’s – mirroring its characters’ similarly warped perceptions. It’s an absolute triumph in terms of visual imagination, and as an in-the-moment polaroid taken of a cultural time and place that, for reasons better and worse, epitomised Britain in cinema and on the street, there’s few works of art that can beat it. There’s even more praise I can give it: Renton remains McGregor’s most successful pop culture performance (while beautifully cast in the Star Wars prequels as Obi-Wan, George Lucas’ writing made sure it never went further than that); Robert Carlyle as Begbie is a towering embodiment of insanity-meets-evil, a terrifying performance only equalled in that era by Ben Kingsley in Jonathan Glazer’s Sexy Beast (and maybe Carlyle’s own chilling work in 1999’s Ravenous). These are all threads which work extraordinarily well on their own, but the tragedy is that it doesn’t add up to something lasting. And yet, it endures – but the reason Trainspotting is burnt into our collective cultural consciousness is its scintillating imagery. We’ll never forget the way Boyle and cinematographer Brian Tufano captured how euphoric it could feel to climb into a filthy pub toilet (after losing your hard drugs in them) and discover an underwater paradise. We’ll never forget how the film enthusiastically emulates (if not necessarily recreates) the experience of actually being on drugs. We’ll never forget McGregor’s monologue. When a British person thinks of the Nineties – whether they grew up through it, or witnessed it through video growing up in a later decade – Trainspotting may be the first thing that enters their mind, or at least forms a vivid, textural picture. 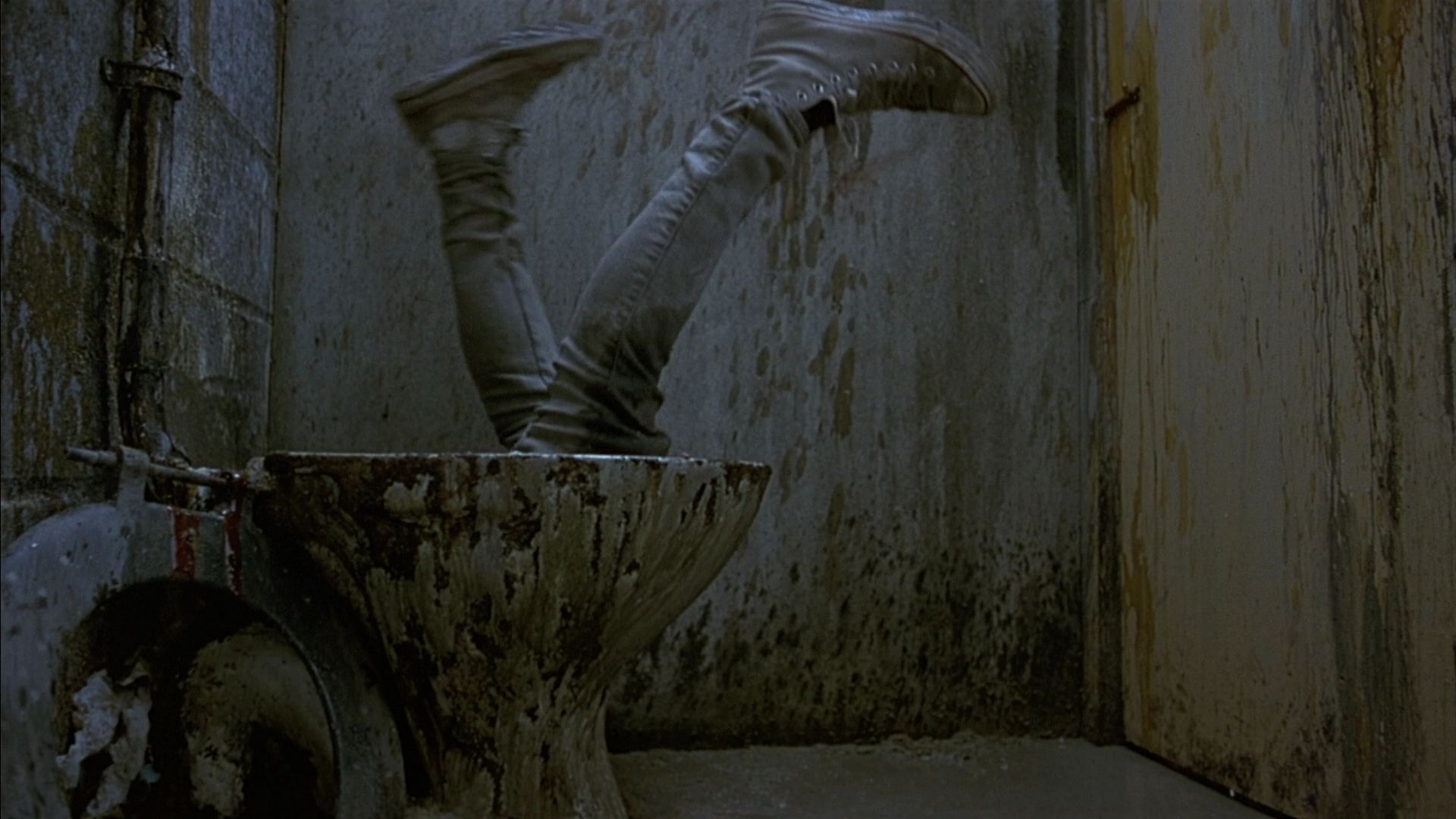 Yes, Boyle’s film has earned its place on those merits alone. But weighing it holistically, there’s almost nothing that connects me to it. It just feels distant. While the movie never attempts to provide moralism when it comes to drug use (although you can probably take away the message that it rarely ends well for the users), there’s no genuine insight to be gained. So, drugs make you feel cool – people will die, relationships will end – but none of that’s relevant. Why? Because Trainspotting never once attempts to say something about all of this. There are only isolated instances of grief, horror, euphoria – ad infinitum.

So although it weaves a wild sensory tapestry, we never learn about these characters, not even its ostensible lead, Renton. By the film’s end, Renton hasn’t changed. ‘That’s the entire point!’ I hear you scream. That Renton caves into his own cynicism, and accepts the bubble-life that the huge wedge of cash he’s just stolen will provide him. I absolutely agree – except there’s no development in that direction at all. He changes on essentially the flip of a coin, meaning it’s difficult to empathise with his decisions. Meaning it’s extra-difficult to view the movie as little more than an exercise in pure aesthetics. 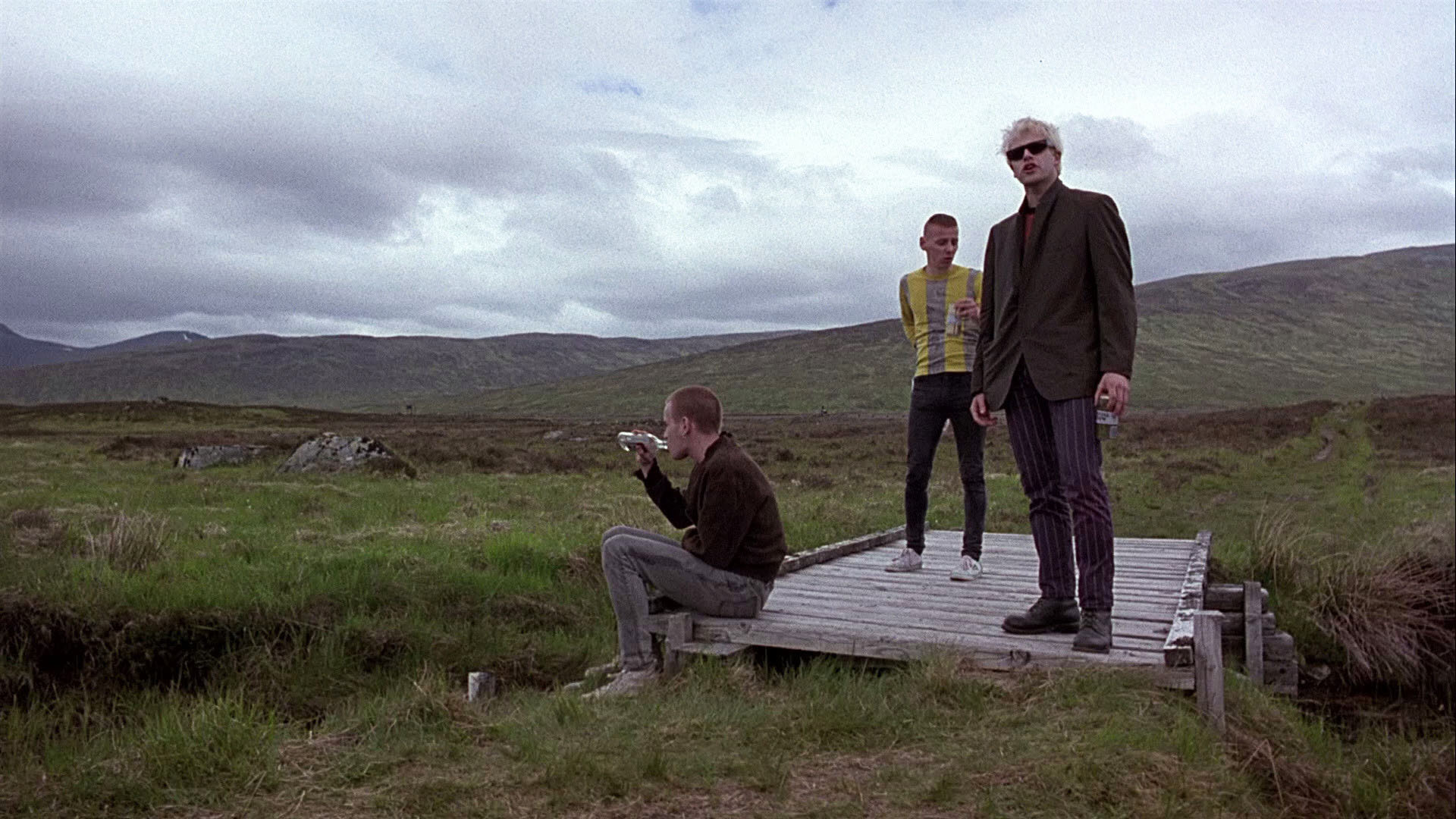 I’m not asking for a dense drama. Even in the best hyper-stylised movies, you can still track a character’s emotional state, and eventual change, through it (think Enter the Void). This is the stuff great narrative-driven cinema is made of, and Trainspotting is lacking heavily. Of course, the movie hinges entirely on the visceral, not so much the narrative; because it lives and breathes on its own terms, I find it difficult to dislike. But when Trainspotting is the Danny Boyle film people keep talking about the most, then I have a problem. There are at least six movies of the director’s that I would rate higher than it: the revolutionary horror 28 Days Later…, the warm hug that is Millions, the seriously underrated sci-fi Sunshine, the underdog crowdpleaser Slumdog Millionaire, the tonal smorgasbord of 127 Hours, and the legit masterwork that is Steve Jobs. Hell, I even think the somewhat undercooked Trance might be better. On the bottom line, these are all movies which serve their base functions and reach their goals in ways that Trainspotting doesn’t. (Then again, when it comes to moment-to-moment instances of his directing style, Trainspotting is the most Danny Boyle movie of all.)

Again there’s the argument that Trainspotting doesn’t have a ‘goal’ – not narratively speaking, anyway. Therefore, it shouldn’t be criticised on the same grounds as the rest of Boyle’s filmography. Yes, things are not as clear in the relatively avant-garde world of Renton and company – and yet, it doesn’t achieve anything substantial with the different storytelling tools it does use, like its extended use of dream sequences, the ever-spinning needle on its moral compass, and the awful consequences its otherwise vibrantly-sketched characters try to ignore. 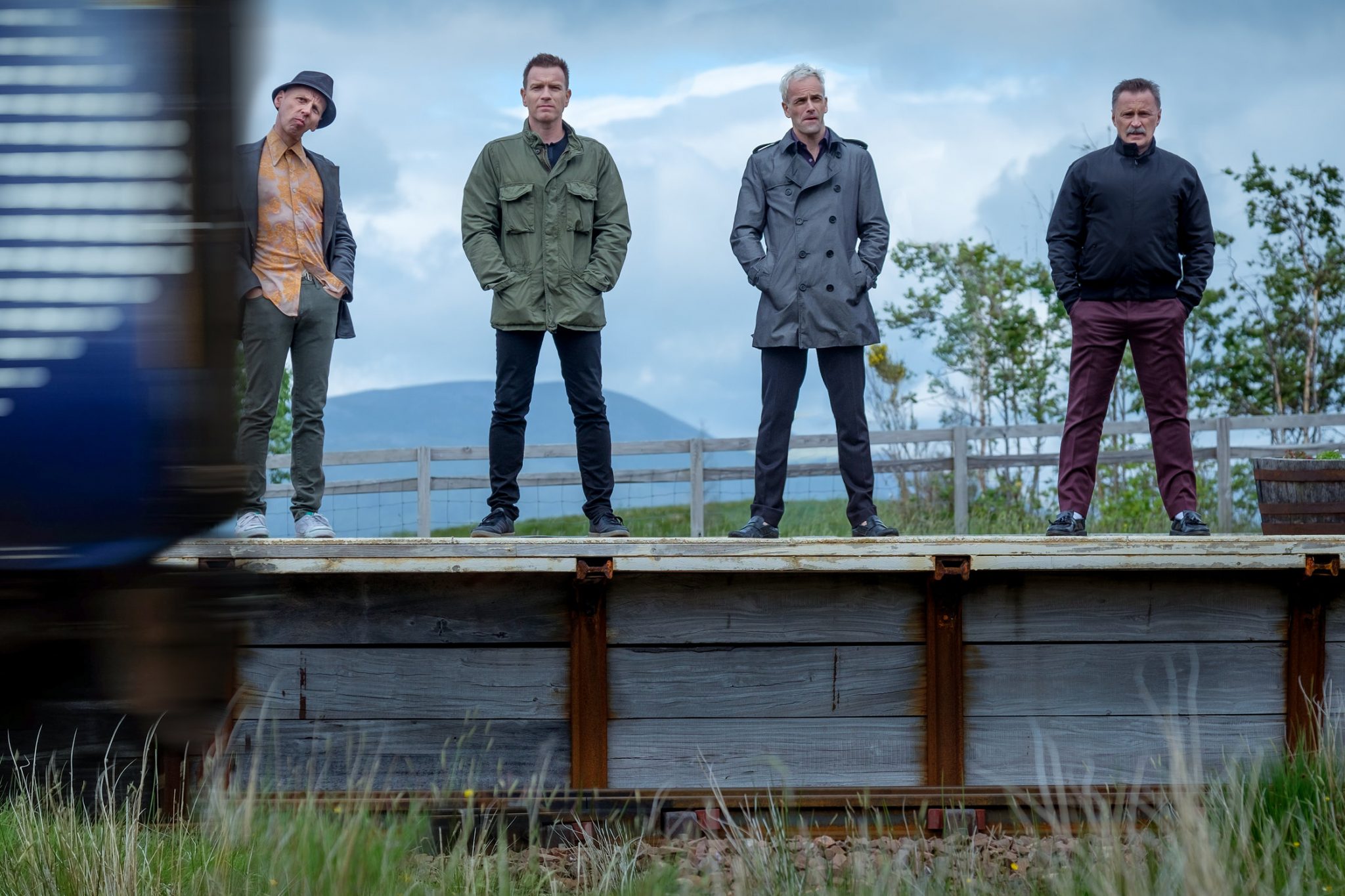 But does any of this actually matter? That all depends on what you want from movies, I guess. Could there be an entire world of subtext and cleverly coded motifs running through Trainspotting that I haven’t yet tuned into? Does the film exist on a different plane I haven’t yet comprehended? Maybe. As it stands, it’s a Danny Boyle film that works on the power of its parts, not its whole. I’m genuinely interested in T2, firstly because the idea of a sequel to a film so completely of its time means it could either slyly play with the concept of nostalgia, or reinvent itself to encapsulate this era of British culture. Secondly, it’s a new Danny Boyle film. And thirdly, the trailer smartly shows that the director has cashed in on his whip-pans and wondrously surrealist sets, all which reveal the glossy artifice of Trainspotting’s singular, jumped-up oneirism. These are, of course, all the things I admittedly love about the original – but as it stands, they’re the only things.