Have you ever wondered what happened to Luke Skywaker’s severed hand? Well, Star Wars: The Force Awakens almost addressed this question.

When an unofficial outline of The Force Awakens leaked in 2014, rumors suggested that a severed hand clutching a lightsaber was supposed to float through space after the opening crawl. Mark Hamill confirmed with The Sun (via Birth.Movies.Death.) that this is indeed how Episode VII was originally intended to open. 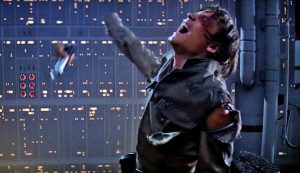 “A severed hand that enters the atmosphere, and then the hand and bone burn away and goes sticking into the surface of Jakku,” said Hamill, “and this alien comes in, don’t know if it was Maz but it was an alien hand who takes the lightsaber away, and then the movie proceeds as you see it.”

We can see why this imagery was probably too grim to make it into the final film, but it admittedly would’ve been pretty awesome. Maybe they’ll recycle the idea in Star Wars: Episode VIII.