A new leak from the official Star Wars: The Last Jedi LEGO toy set reveals First Order Supreme Leader Snoke with a mysterious figure beside him. The leaked images show all the familiar characters, but what’s most intriguing is Snoke’s small ghostly companion. See the image below via IGN: 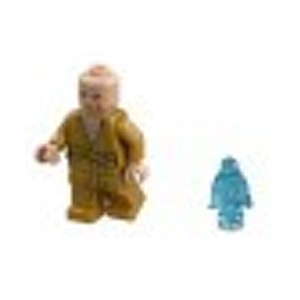 A closer look, all be it blurry.

It’s hard to make out exactly who or what it is, but it looks to be a depiction of someone on a hologram, which would reference the scenes in The Force Awakens where Kylo Ren speaks to Snoke via the hologram communication system.

The LEGO set also gives us a closer look at Snoke’s Praretorian Guard:

Snoke’s LEGO figure leaked last month, which had many questioning his golden robe: