The talk of the town throughout all of this year’s awards season has been the wild success of musical La La Land and the juggernaut continued its success last night at the SAG Awards with Emma Stone winning the Best Actress award. But with the success continuing to rise, more rumours have emerged on how the film almost had a very different leading couple – Miles Teller and Emma Watson, who were both at one point onboard the musical before it got the final green-light.

Page Six reports that both Teller and Watson lost out on the roles for a few different reasons including some demands that the actors reportedly wanted. The site writes that sources said:

“Miles was offered $4 million to star in ‘La La Land,’ but he said he wanted $6 million. Watson was offered the lead female role, but she initially wouldn’t commit. Then she began making all these crazy demands, like rehearsals for the film must be done in London — for a film called ‘La La Land!’ They jumped through hoops to make it work with her, but she just didn’t feel the film was right for her.”

Teller was quick to shoot down such demands and rumours, taking to Twitter to say there was no validity to them: 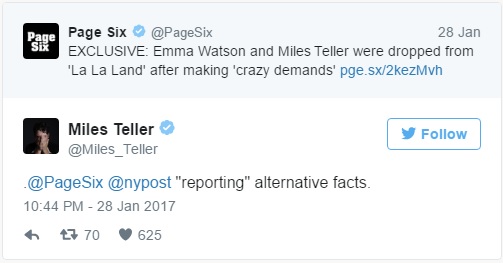 The Whiplash star had spoke about the La La Land experience in 2015 to Esquire saying that he was told by his agent he was “no longer creatively right” for the film. It would have no doubt given the film a different look and feel to it, but as with many Hollywood films its a process to get them made – actors fall out, new ones come in all the time and this is one, it seems, it no different.