It seems all is well again with The Batman… After weeks of speculation surrounding both The Batman and the DC/Warner Bros expanded cinematic universe, some good news has finally come for fans as the studio’s have found their new director for their “tentpole” DCEU film. And, in a surprising turn of events, it’s Dawn of the Planet of the Apes and Cloverfield director Matt Reeves who has joined the film to take the reigns.

You may remember that just last week word had spread through Hollywood that Reeves had exited negotiations with Warners about taking over from Ben Affleck as director, but discussions had ground to a halt and that Reeves had walked away. Whether that was all a ruse or that the two parties were able to re-negotiate what was holding them up, they have finally got their man in what is certainly a very exciting prospect. Indeed, Affleck took to Twitter to welcome Reeves to the film: 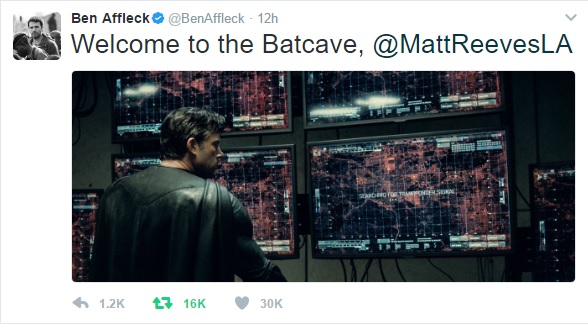 In an official statement, Reeves said:

“I have loved the Batman story since I was a child. He is such an iconic and compelling character, and one that resonates with me deeply. I am incredibly honored and excited to be working with Warner Bros. to bring an epic and emotional new take on the Caped Crusader to the big screen.”

“We are thrilled to have Matt Reeves taking the helm of Batman, the crown jewel of our DC slate… Matt’s deep roots in genre films and his evolution into an emotional world-building director make him the perfect filmmaker to guide the Dark Knight through this next journey.”

While its release date is a little up in the air, The Batman will see Affleck return as Bruce Wayne/Batman alongside Jeremy Irons (Alfred), J.K. Simmons (Commissioner Gordon) and Joe Manganiello as villain Deathstroke.