John McTiernan, the man behind Die Hard, has some very strong words against superhero and modern Hollywood blockbusters.

McTiernan told Premiere France that he “hate[s] the majority of [major studio] films for political reasons” before ripping into Marvel’s Captain America:

“I’m annoyed the second they start. Captain America, I’m not joking… The cult of American hyper-masculinity is one of the worst things to have happened to the world during the last 50 years.

“Hundreds of thousands of people have died because of this idiotic delusion. So how is it possible to watch a film called Captain America? All they’re making are comic-book adaptations. There’s action but no human beings, they’re films made by fascists.”

‘There’s action but no human beings, they’re films made by fascists.’ 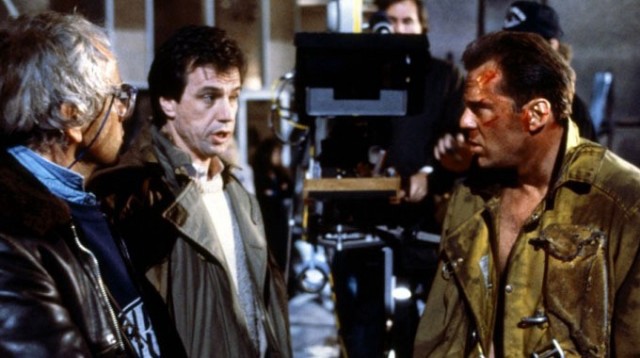 McTiernan, pictured on set with Bruce Willis on the set of Die Hard.

And McTiernan wasn’t done there, as he went on to slam George Miller’s critically-acclaimed action film Mad Max: Fury Road, calling it a “corporate product” before adding:

“They’re making all the kids in the world think that they’ll never be important enough to have a film made about their life. It’s a unique moment in the history of cinema, it didn’t used to be like this. A kid used to be able to learn how a man or a woman should act by watching films. Morals. Comics make heroes for businesses.”

“Comics make heroes for businesses. It didn’t used to be like this.”

McTiernan directed big productions such as Predator, The Hunt for Red October, Last Action Hero and The Thomas Crown Affair, and he’s now currently working on his first film (Thin Rain) since Basic in 2003. Based on his quotes, we certainly won’t see him delve into the superhero genre anytime soon.