For years fans have been asking Seth MacFarlane when they’re going to get a Family Guy movie. While MacFarlane has expressed interest in making a feature film based on the Griffin family, he’s never officially announced that a movie is in development. Based on a recent Twitter post, though, we may see a Family Guy movie sooner than later.

A fan asked MacFarlane, “when are you going to stop fannying around and actually do a Family Guy movie?” He responded, “Soon. Soon.” 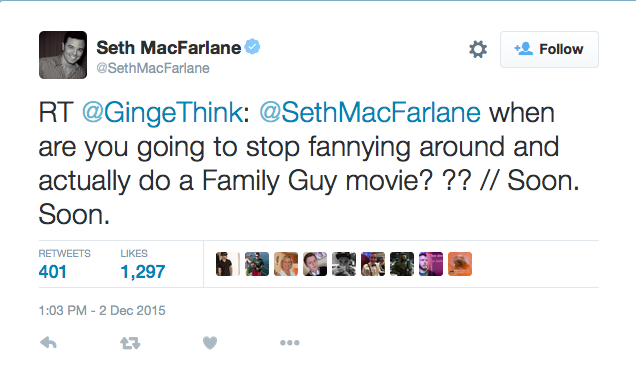 While there’s no way to say how long “Soon” is, this does imply that a Family Guy movie will likely happen eventually. Seeing how A Million Ways to Die in the West and Ted 2 weren’t the biggest box office hits, maybe this would be a good way for MacFarlane to get back in good graces with audiences.

Would you like to see a Family Guy movie or would you rather see another Simpsons Movie?