A crew member from the Han Solo spinoff has shared an image of the official crew T-shirt, which may have just revealed the movie’s official title and logo.

The images come via MakingStarWars and show the front and back of the crew shirt. The front featuring the title: “Star Wars: Solo”, while the back has the text “we shot first” which refers to the iconic character’s legacy. Check the photos out below on Twitter:

When a movie is untitled during production, usually the title on the crew’s uniform won’t reflect the official one. But as that’s not always been the case, we can certainly consider it a possibility, especially as “Star Wars: Solo” is quite a credible title. 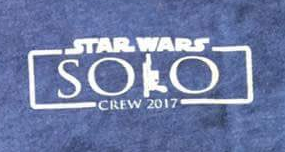 A closer look at the potential logo shows the blaster forming the “L” in “Solo.

21 Jump Street‘s Phil Lord and Christopher Miller are at the helm, and the latter announced the film’s working title as “Red Cup” earlier this year: