While The Boss Baby and Beauty and the Beast continued to impress at the US box office, Paramount’s Ghost in the Shell had a poor second week.

The live-action reboot was expected to drop off after also disappointing on its debut. And that’s exactly what happened as it took a hit of over 60%, the biggest drop in the weekend’s top 10. It did only at least fall two places though, narrowly beating Power Rangers to fifth spot.

So far it’s taken in $31 million which isn’t great in comparison to its $110 million budget. And Paramount openly blamed the film’s failures on Scarlett Johansson’s controversial casting, admitting that the negative response to her casting “impacted the reviews” and therefore the box office takings:

“We had hopes for better results domestically. I think the conversation regarding casting impacted the reviews. You’ve got a movie that is very important to the fanboys since it’s based on a Japanese anime movie. So you’re always trying to thread that needle between honoring the source material and make a movie for a mass audience. That’s challenging, but clearly the reviews didn’t help.” Paramount distribution chief Kyle Davies told CBC news.

With the movie based on Japanese manga, much was made about the casting of Johansson in the lead role, with many adamant that the part should have gone to a Japanese actress:

The Ghost in the Shell Website https://t.co/eqy8CpndC6 has a meme maker of sorts where anyone could "become Major" so I had some fun…. pic.twitter.com/EadKs04H9a

Elsewhere, The Boss Baby maintained its number 1 spot with Beauty and the Beast also staying in second. New arrivals Smurfs: The Lost Village and Morgan Freeman’s Going in Style had steady debuts, shooting straight into the top 4. See the full top 10 below via Box Office Mojo: 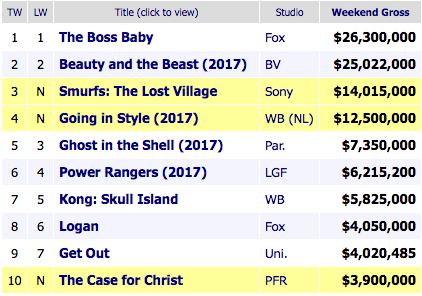