Rarely does a horror film receive high praise but Jason Peele’s first stab at the genre is proving a success, as remarkably the film is yet to get a bad review, scoring 100% on Rotten Tomatoes. 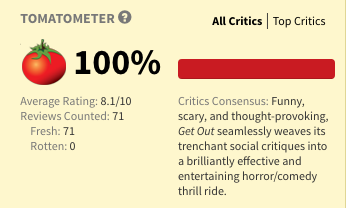 Its positive reviews include our own, as well as other established critics, here’s a rundown of some of its grades:

Much of the feedback has noted how impressively the film tackles racism. The story follows black male protagonist Chris (Daniel Kaluuya) in his girlfriend’s (Allison WIlliams) parents’ regressive Southern town, where unsettling servants and multitudes of microaggression lead to true violence and horror.

Get Out hits US screens tomorrow and you can check out its trailer below: