The awesome concert art for Guardians of the Galaxy Vol. 2, which was released by Entertainment Weekly, reveals all the characters we know and love. This includes Star-Lord, Gamora, Rocket, Drax, Nebula, Yondu, and a super adorable baby Groot. There’s a new player in the pic, however, that you might not recognize. 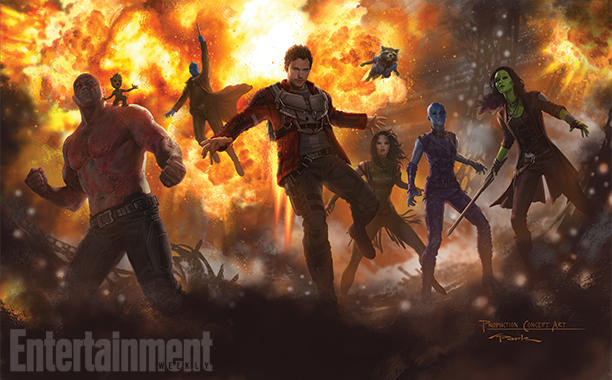 Guardians of the Galaxy Vol. 2 concept art via EW.

The new alien on the block is Mantis, played by Pom Klementieff from Spike Lee’s Oldboy. “She has never really experienced social interaction,” executive producer Jonathan Schwartz commented. “Everything she learns about dealing with people, she learns from the Guardians of the Galaxy, which is a very weird group to learn your social intricacies from.”

Of course the real highlight on the poster is Groot, who couldn’t look cuter in mini form!!! When asked about the character and his new look, Schwartz said, “He doesn’t have the wisdom and experience of that Groot. He’s a younger Groot and a more rambunctious Groot. The question is, is he the same Groot, just smaller? Or is he a different Groot that’s sprung up from the seed of the first Groot?”

What do you think of the concept art? We can’t wait to see more of Mantis and Groot, as well as the rest of the Guardians team.