Emma Watson’s The Circle failed to meet expectations in its opening weekend at the box office. The sci-fi thriller had a disappointing debut in the US, taking in just $9.3 million with a $18 million budget.

According to Variety, it fell short of its “double-digit projections.” It still managed to make the top 4 though, but was beaten by new arrivals, comedy How to be a Latin Lover and Indian epic Baahubali 2: The Conclusion.

While Fast and Furious 8 took top spot once again and even broke the $1 million mark worldwide. See the weekend’s full domestic top 10 below, via Box Office Mojo: 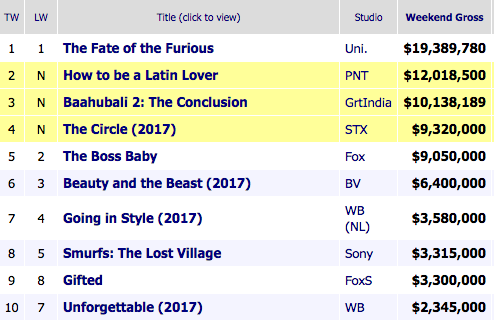 Meanwhile,  Guardians of the Galaxy Vol. 2 made its international bow over the weekend, earning $101.2 million, which is 57 percent greater than what the last film made in the same context. And expect its box office takings to increase a whole load more when it hits theaters in the US on Friday.