Dunkirk fought off competition from new arrivals, The Emoji Movie and Atomic Blonde to top the US box office for the second straight weekend.

The Emoji Movie debuted at second with $26 million, which isn’t too bad following a string of poor reviews. While Atomic Blonde came in at fourth with $19 million, narrowly behind Girls Trip. But it was Dunkirk that took top spot once again with $28 million.

Meanwhile, Detroit starring John Boyega, earned just $365,455. Although debuting in limited release, it’s expected to increase with its full release next weekend. See the top 15 below via Box Office Mojo: 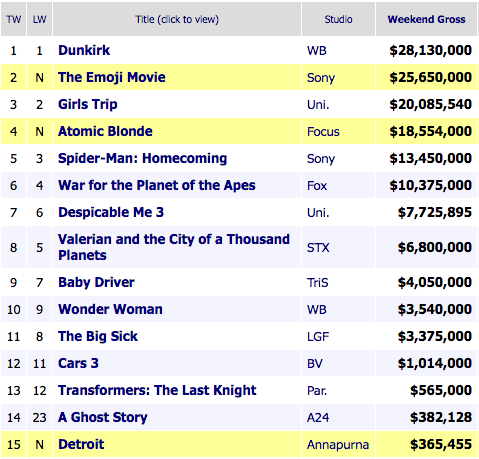 Dunkirk also impressed overseas, making $46 million over the weekend, which brings its international total to $131 million and its worldwide total to $234 million. Read our 5 star review of the epic war film below: