Earlier today, the new Blade Runner 2049 trailer arrived, following a Q&A with the director Denis Villeneuve and the film’s lead cast Harrison Ford and Ryan Gosling. However, the Q&A didn’t quite go to plan as fans called it “painful” and “awkward” to watch.

The Q&A was approximately 25 mins long but 25 mins too long for the panel it seemed. Gosling and Ford in particularly seemed under prepared and disinterested, which makes for a difficult viewing, see the full video here or a cutdown version below:

With the video streamed live on Facebook, fans were commenting live with the event, expressing how “uncomfortable” it was: 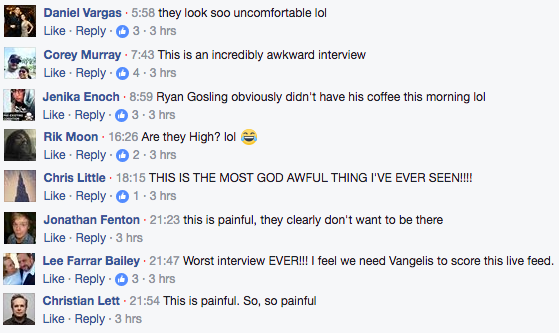 However, fans were soon forgiving after the impressive new trailer was released. Blade Runner 2049 hits theaters on October 6th.