Okay, I’m going to break out the visuals for this review. Is the following image from A) Taken or any of its sequels, B) Blacklight, C) Non-Stop, D) Unknown, E) Run All Night: 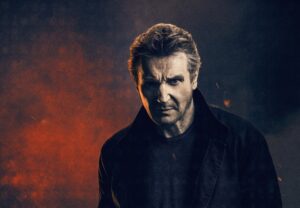 If you answered Blacklight, that’s corrected! If you answered anything else, eh… it’s still kind of correct. Once again, Liam Neeson finds himself playing an aging authority figure with a very particular set of skills and one goal: to protect his family. We’ve seen Neeson in this role so many times since 2008 that these movies are starting to blend into each other. At the very least, Neeson could change up his wardrobe between films.

Don’t get me wrong, I love Neeson and I’ve enjoyed many of his action thrillers. Cold Pursuit, in particular, is an underrated gem, showing that Neeson can still deliver over a decade after Taken. Where that film distinguished itself with a sense of humor, though, Blacklight does little to stand out. Like Honest Thief, another collaboration between Neeson and director Mark Williams, the film simply goes through the motions. That might be alright for fans who just want their Liam Neeson fix. Even on that level, however, the film doesn’t give Neeson as many badass moments as one would hope.

Aside from familiarity, Blacklight feels misguided in its attempt to provide real-world commentary. The film opens with a politician named Sofia Flores (Mel Jarnson) delivering a passionate speech about women and people of color standing up to those who’ve oppressed them for generations. And our main character is an old white guy? Well, this just got awkward fast. When Flores dies mysteriously in a hit and run, a journalist named Mira (Emmy Raver-Lampman) gets a hot tip that the FBI might’ve been involved. Neeson stars as Travis Block, an FBI fixer who wants to give up this most violent life and spend more time with his granddaughter. When caught in the middle of this conspiracy, Travis must choose between his loyalty to the Bureau and doing the right thing.

While the plot is standard and the political commentary is misguided, Blacklight could still be salvageable if Neeson got to do what he does best. Neeson gives a compelling performance, as always, but Blacklight disappoints in the action department. Whenever Neeson needs to run or throw a punch, the film cuts away or shrouds the action in the dark. You could chalk this up to Neeson’s age. He is almost 70, after all. It’s also worth noting that Blacklight was shot during the pandemic, which naturally comes with some restrictions. Neeson thus spends much of the movie behind the wheel of a car. In addition to the Dodge Challenger, the film works in plenty of product placement for Bud Light, Starbucks, Domino’s, and Stubb’s Bar-BQ.

Taylor John Smith, who plays Travis’ protégé, does most of the running and punching for the first act. After the third car chase involving Neeson, Blacklight begins to run on fumes. It all builds to an anticlimax with a rushed resolution. Blacklight may provide passable escapism for Neeson’s hardcore fans. However, when you have a talent like Neeson and a filmmaker like Williams (whose credits include Ozark), you expect something more.