The first Black Panther trailer has broken an unwanted record, becoming the most disliked Marvel video on YouTube. The trailer only arrived two weeks ago and has already racked up over 20 thousand dislikes on the site.

Marvel’s official YouTube channel has over 4 thousand videos but none with more dislikes than Black Panther. It overtakes Thor: Ragnarok to obtain the undesired prize. See the top 3 most disliked Marvel videos below via SeeZisLab: 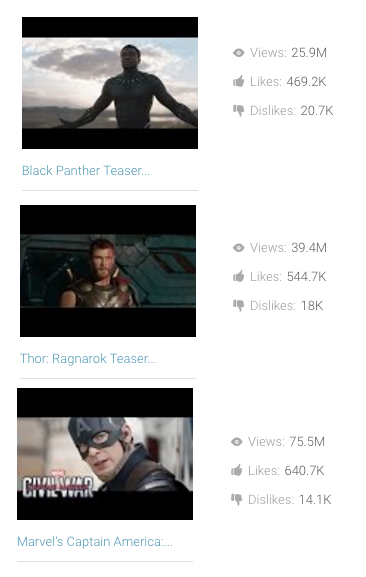 It’s not all bad for Black Panther though, as the trailer has generally performed very well. It received 89 million views across all platforms in its first day, becoming the tenth most-watched trailer in the first 24 hours. It’s also currently Marvel’s ninth most viewed video on YouTube and it’s fourth most liked.

Creed’s Ryan Coogler is at the helm, with Chadwick Boseman, Michael B. Jordan, Lupita Nyong’o, Andy Serkis and Martin Freeman starring. It arrives in theaters on February 16, 2018. See its trailer below: