Baywatch disappointed at the box office in its opening weekend.

The comedy reboot stars Dwayne Johnson and Zac Efron and was expected to perform much stronger in the US. Its domestic opening was mediocre to say the least, projections suggested it would make $45m but instead made almost half of that with $23m.

It’s below-par debut is thought to be mainly down to the poor reviews it has received, with a low 19% score on Rotten Tomatoes. It still managed third place in the rankings though, but Pirates of the Caribbean 5 was oceans ahead, taking top spot, with a $77m opening. See the full top 10 below via Box Office Mojo: 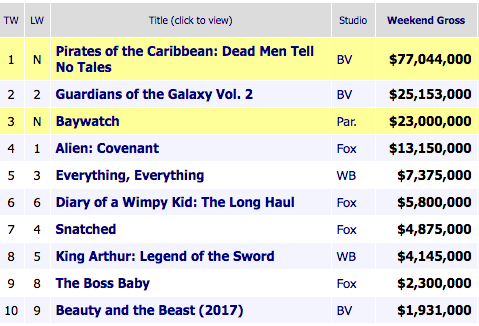