Are you ready to have the time of your life again? According to The Hollywood Reporter, ABC is planning to remake Dirty Dancing into a TV movie. The special three-hour event will be similar to NBC’s recent trio of TV musicals, The Sound of Music, Peter Pan, and The Wiz.

Abigail Breslin of Scream Queens will be taking on the role of Baby, who was made iconic by Jennifer Grey in the 1987 original film. As we all know, Breslin previously demonstrated her dancing skills with her Oscar-nominated role in Little Miss Sunshine. The 19-year-old actress let everyone know that nobody puts Brelin in the corner on Twitter. 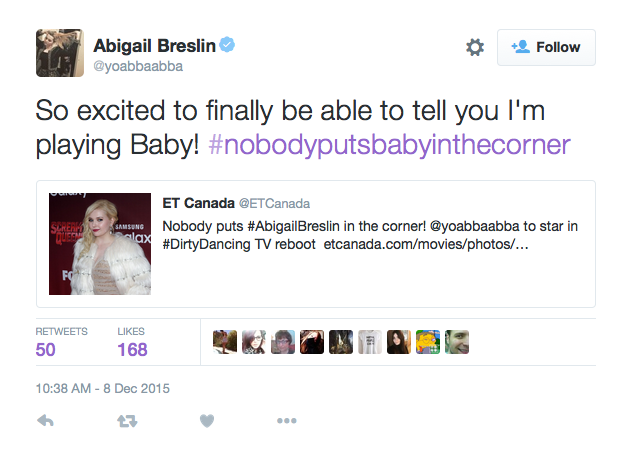 It’s still unknown who will be playing Johnny Castle, who was previously portrayed by the late Patrick Swayze.

Have you been waiting for so long to see a new Dirty Dancing?