It’s been ten years since the final episode of Six Feet Under aired. For many, it has never been equalled – even by the likes of Breaking Bad, Mad Men or The Wire (yes, even The Wire). That’s because there was nothing ever quite like this show, and there hasn’t been since; during its five seasons, it blended magic realism, gritty thrills, and soap opera storylines to unparalleled effect, resulting in one of the most emotionally gruelling, painful, and ultimately rewarding television show ever made. Based around the lives of the Fishers, a family who run a Los Angeles funeral home, Six Feet Under knew how to move us in the most profound ways possible – usually by making the everyday universal, and the sublime commonplace. To celebrate this special show on the tenth anniversary of its conclusion, we’ve compiled a list of the moments that have stayed with us the most. Naturally, unbelievably massive spoilers follow – so read on, and enjoy with caution. 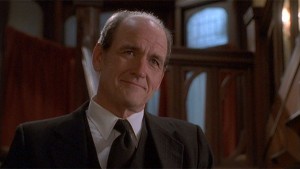 One of Six Feet Under’s most powerful moments comes within its first few minutes: in the pilot episode, Nathaniel Fisher Sr, patriarch of the Fisher family, is taking the car (a hearse, no less) to pick up his son from the airport. He argues on the phone with his wife Ruth (Frances Conroy) about blood pressure, giving up milk, and how he should quit smoking – before getting distracted by lighting another cigarette, unable to notice the bus about to total his car from the left. To have this terrifically charismatic character (portrayed by Richard Jenkins) set up so perfectly, only to have him obliterated the next minute, was the world’s introduction to Six Feet Under’s landscape-changing approach to the TV series format. The Sopranos may have altered the course of TV, but for many, it all started here. 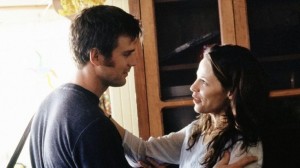 One of the show’s most beloved traits was its dream sequences; frequently putting a hilarious, satirical spin on one of the characters’ lives, it allowed David, Claire, Nate and Ruth Fisher to get out of their shell by playing out elaborate fantasies in their heads. But in Season 3, during the unbelievably painful-to-watch storyline of the disappearance of Nate’s wife, Lisa (Lili Taylor), one of these sequences comes unexpectedly like a rain of bricks: with zero frills, and an uncertain tone between dream logic and real life, Lisa walks in from the cold to Nate (Peter Krause), and he rejoices, asking her where she’s been all this time. But in an instant, Nate is returned to reality, staring blankly at an empty doorframe; for a few seconds, we believe that Lisa has returned. This show was never afraid to pull the rug from under us, but not to get us interested because of pure shock value; ultimately, it was to make us feel closer to these characters, their struggle, and in Nate’s case, his intense grief. It worked. 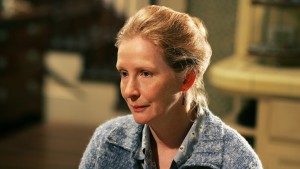 Ruth in the garden

Ruth is one of Six Feet Under’s best characters, chiefly because she’s also one of its biggest mysteries; this aging widowed mother surprised us countless times through the series, but one of her most understated moments comes when we’ve just spent an entire episode following her daughter Claire (Lauren Ambrose) as she goes to visit her wily aunt Sarah (Patricia Clarkson), who is the complete opposite to Frances Conroy’s stick-in-the-mud Ruth: with Joni Mitchell’s ‘Back to the Garden’ as a backdrop, she shows Claire how to live her life free and loose. It’s only when Claire returns to her own home that she stops still, overhearing her mother hum the same tune. This moment gave Ruth an entire lifetime’s worth of backstory in a single moment, proving to us that if you think you’d sussed a character on this show, you’d better think again. 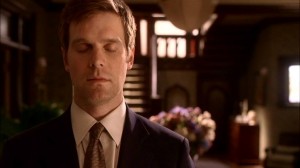 Nate’s battle against a deadly brain condition, AVM (arteriovenous malformation), lasted multiple seasons. It was gut-wrenching to watch this man, so free and full of life, skirt the boundaries of life and death so closely; toward the end of Season Five, Nate (Peter Krause) undergoes a massive seizure that leaves him in a state of near-death – but, ultimately, at the beginning of the slow road to recovery, lying safely in a hospital bed. His brother David (Michael C. Hall) is by his side, and falls asleep, content in the knowledge his brother is doing okay. But after waking from one of the show’s most out-there dream sequences, he’s horrified to find Nate staring blankly outward, accompanied by a long death-knell hospital bleep. The show featured many, many deaths; of all of them, though, this one was the toughest to accept. 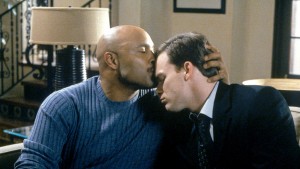 Each point in this list could easily be any moment from the last few minutes of ‘Everyone’s Waiting’, the show’s finale. This much-celebrated segment flashes through the lives of the Fishers, instilling both the inevitability of death but also the fullness of life – yet one moment stands out as ever-so-slightly more poignant than the others. Many years after Keith (Mathew St. Patrick), the love of David’s life, has been killed while on a security job, David is shown as an old man sitting peacefully at a park with his family. The visage of Keith suddenly appears in the field in front of him, in all the vibrancy of his youth; in an apparent state of shock and bliss, David keels over unceremoniously. In a lesser show, this would be one hell of a cheesy moment, but in Six Feet Under’s hands, it’s transcendent. Could Keith have been calling David to the next world? Or was he simply a flicker in David’s unconscious? Six Feet Under, astoundingly, always skirted around the notion of God and an afterlife; its greatest move was in showing everything that life throws at us, but letting us decide what it all means – if anything.