Transformers: The Last Knight comfortably took top stop at the weekend’s domestic box office, but performed poorly in comparison to previous films of the series.

The fifth film in the franchise took $45 million on its domestic debut, which is almost half of what the lowest-grossing first Transformers movie made, and it’s considerably lower than the franchise’s highest-grossing opening film, Revenge of the Fallen (Transformers 2), which took $109 million. It’s also $55 million down on the previous movie, Age of Extinction.

See the top 5 Transformers US openings below: 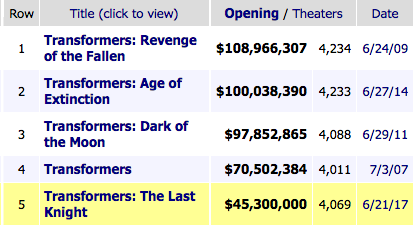 It still managed to overtake Cars 3 at least, but with not much other competition or new big releases out, it was easily expected for Paramount. See the weekend’s top 10 below via Box Office Mojo: 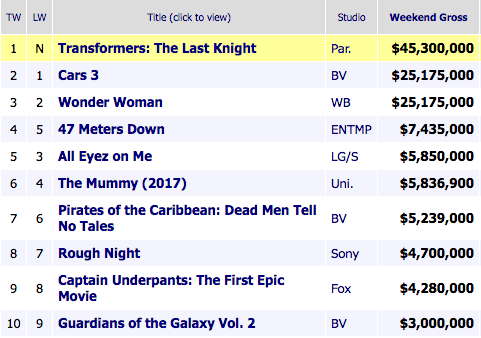 It’s no huge surprise to see Transformers 5 have the weakest opening in the series, as it received terrible reviews in a franchise that is looking more and more tired with every new entry. Time to call it a day, Bay?

TRANSFORMERS: THE LAST KNIGHT: Assembles KING ARTHUR, SUICIDE SQUAD and, well, TRANSFORMERS into the shittiest movie of the year. Maybe ever

It did however perform much stronger overseas which will no doubt mean more sequels. Read our review of the film here: