Universal’s The Mummy reboot had a disappointing domestic opening at the box office.

It was expected to be one of the hits of the year in the US but struggled on its debut, following a string of poor reviews. According to BoxOffice.com, the film was projected to make $50 million in its opening domestic weekend, but it only managed $32 million, which is almost half of Wonder Woman‘s weekend profit. See the top 10 below via Box Office Mojo: 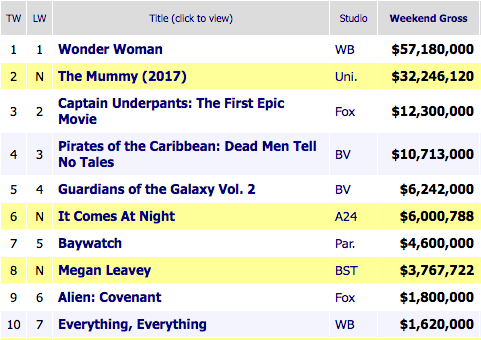 The Mummy also did considerably worse than the original films, which date back to 1999, and that’s excluding inflation:

However, the movie did perform much better overseas, with a respectable $174 million global opening weekend. This is thought to be down to Tom Cruise’s worldwide presence, and it turns out that the film has given Cruise his biggest global opening ever.