With the release of Quentin Tarantino’s eighth film, The Hateful Eight, we’re witnessing the filmmaker at the most masterful point in his career. He’s tackled several genres, caused insane amounts of controversy, and redefined independent cinema back in the early 1990s. Now, lets see how his latest three-hour Western ranks among his earlier films. 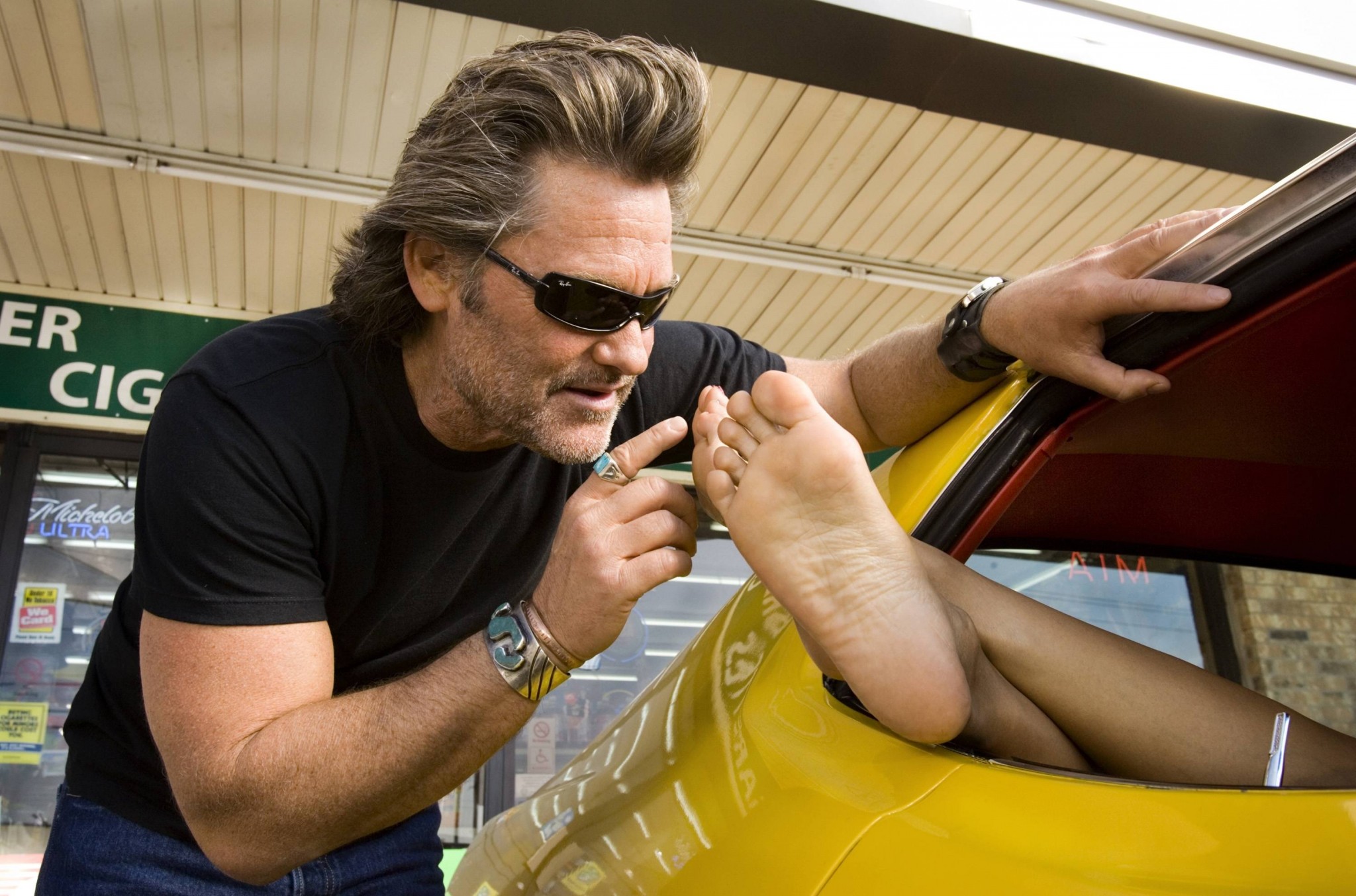 Generally considered Tarantino’s worst film, Death Proof is the director’s love letter to 70s exploitation and muscle car movies. The first half is a cat and mouse game featuring a group of very cool ladies. We get to know them through long, almost stagnant scenes of dialogue; they discuss potential boyfriends, drugs, and everything in-between. Until the equally cool, yet diabolical Stuntman Mike (Kurt Russell) pops up, and it’s all death and destruction from there.

The second half of Death Proof is filled with roaring car chases through vast, open roads with injections of intense violence. Tarantino takes inspiration from films like Bullitt (1968) and clearly has lifted his key favorite frames from the original Mad Max. Again, we’re introduced to a group of badass girls, only this time, Stuntman Mike has bitten off a little more than he can chew. Death Proof has to be commended for its excellent soundtrack, extraordinary stunts, practical effects and an enigmatic performance from Kurt Russell. 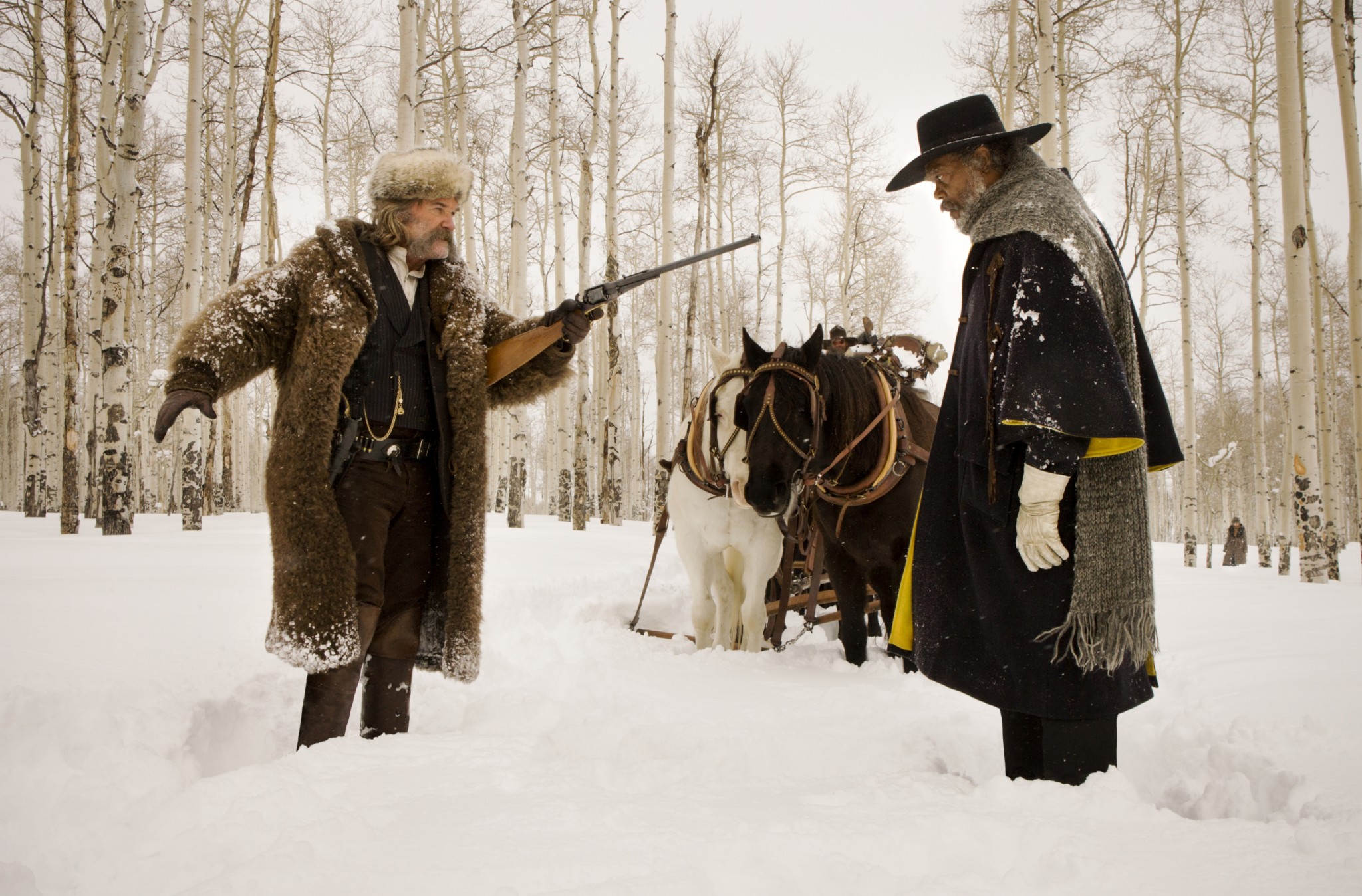 Quentin Tarantino is one of the only director’s making movies today who could get away with a three hour running time. He’s also probably the only director who could get away with having an overture and intermission. Staged like a play with an all-star ensemble that includes Samuel L. Jackson, Kurt Russell, and Jennifer Jason Leigh, The Hateful Eight is certainly one of Tarantino’s most ambitious films, even if it’s not his absolute best. The fact that this isn’t his magnum opus is just a testament to what a masterful filmmaker he is, however. The Hateful Eight drips with Tarantino’s passion for filmmaking and his flair for dialogue that can’t be replicated by anyone else. Intimate while being bombastic, familiar while being fresh, and brutal while being beautiful, it’s a film with Tarantino written all over it. 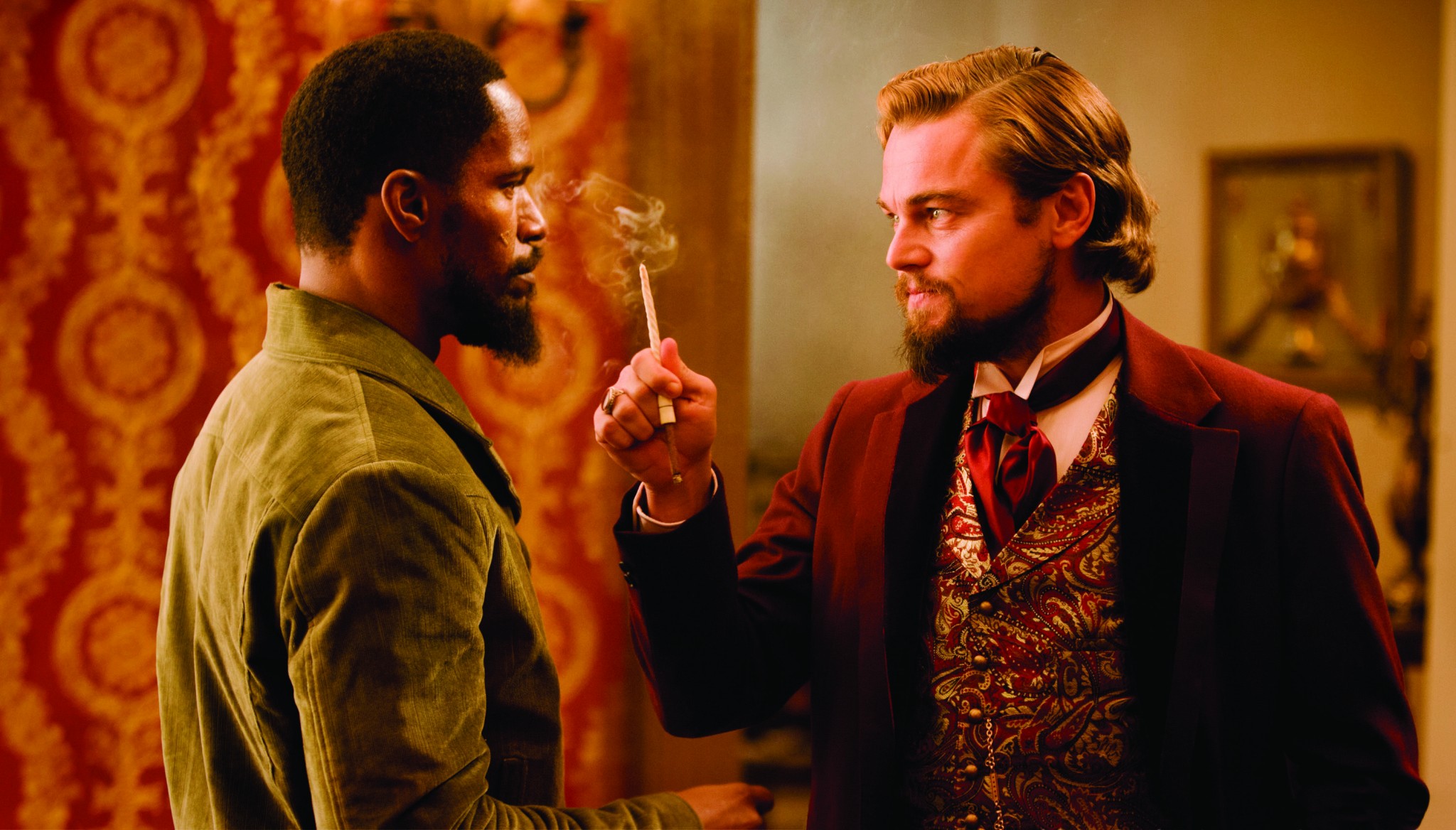 “You know what they’re going to call you? The Fastest gun in the South,” says Dr. King Schultz, as the charming but deadly bounty hunter looks on in amazement at his new partner Django. The newly freed slave draws a revolver with lightning speed; but it’s not until the end of the epic, blood-soaked Western that we see Schultz acknowledge his knack for causing mayhem. By then we’ve traveled the badlands of Quentin Tarantino’s pre-civil war South, where people are as horrendous as ever, and slavery is in full stride and rich white men with great facial hair force their prisoners against each other in fights to the death.

Tarantino’s vision is a poignant one, never losing its edge amidst the cheeky dialogue and comical tone. As Django unleashes a storm of bullets on the residents of Candyland, we’re relishing in pools of gore and tense direction, but something uncommon is taking place. A renegade black gunslinger massacres a ton of malevolent white folks. And as we come to feel the squeamish pain Dr. Schultz wears on his face during scenes of helpless slaves being torn apart by rabid dogs, or beating each other to the bone, there’s nothing quite so satisfying and timely as watching Jamie Foxx, Fastest gun in the Old South, send the entire Candie family to the afterlife via six-shooter heaven.

The film that solidified Tarantino as one of the best American filmmakers of his generation, Reservoir Dogs paved the way for independent cinema. There was nothing quite like it. A genre film with razor sharp teeth that oozed style. Reservoir Dogs uses a non-linear structure to tell the story of a robbery gone horribly wrong, and we feel the same sense of confusion and chaos that the on-screen crooks feel. We never see the actual heist take place, but through an exceptional script and unforgettable characters, Tarantino creates a dense world within the confines of an average warehouse. Whether we’re witnessing Mr. Blonde (Michael Madsen) ruthlessly torture a young police officer, or stuck in the middle of a three way mexican standoff between Mr. White, “Nice Guy Eddie”, and the mastermind, Joe Cabot (Lawrence Tierney), Tarantino’s debut feature is an electrifying, inspirational work of art.

A tragic tale of revenge, love and loss. Kill Bill wears its various influences on its sleeve, and does well by them. Vol. 1 is the ultra-violent first half that focuses on The Bride at the beginning of her quest to get even with a group of assassins who left her for dead. She takes on O-Ren Ishii — now the queen of the Japanese Underworld — and her army of sword-wielding bodyguards. Tarantino goes mental in his thirst for blood; the “Showdown at House of Blue Leaves” is as brutal as The Bride herself, who’s dressed in a Game of Death inspired yellow tracksuit. She slices through dozens of swordsmen with custom made Hattori Hanzo steel, in what is possibly the most exciting scene Tarantino has ever created. And when The Bride comes out on top, surrounded by pools of gore and severed limbs, she instantly joins the ranks of unstoppable warriors like Charles Bronson, Clint Eastwood and Bruce Lee.

Vol. 2 has a much more subdued, mature tone. The Bride runs into serious trouble, facing death a handful of times. Fights become personal; Bill’s actions are revealed to be the result of deformed love, and the final showdown with the titular antagonist is shockingly anti-climactic yet heartbreaking. 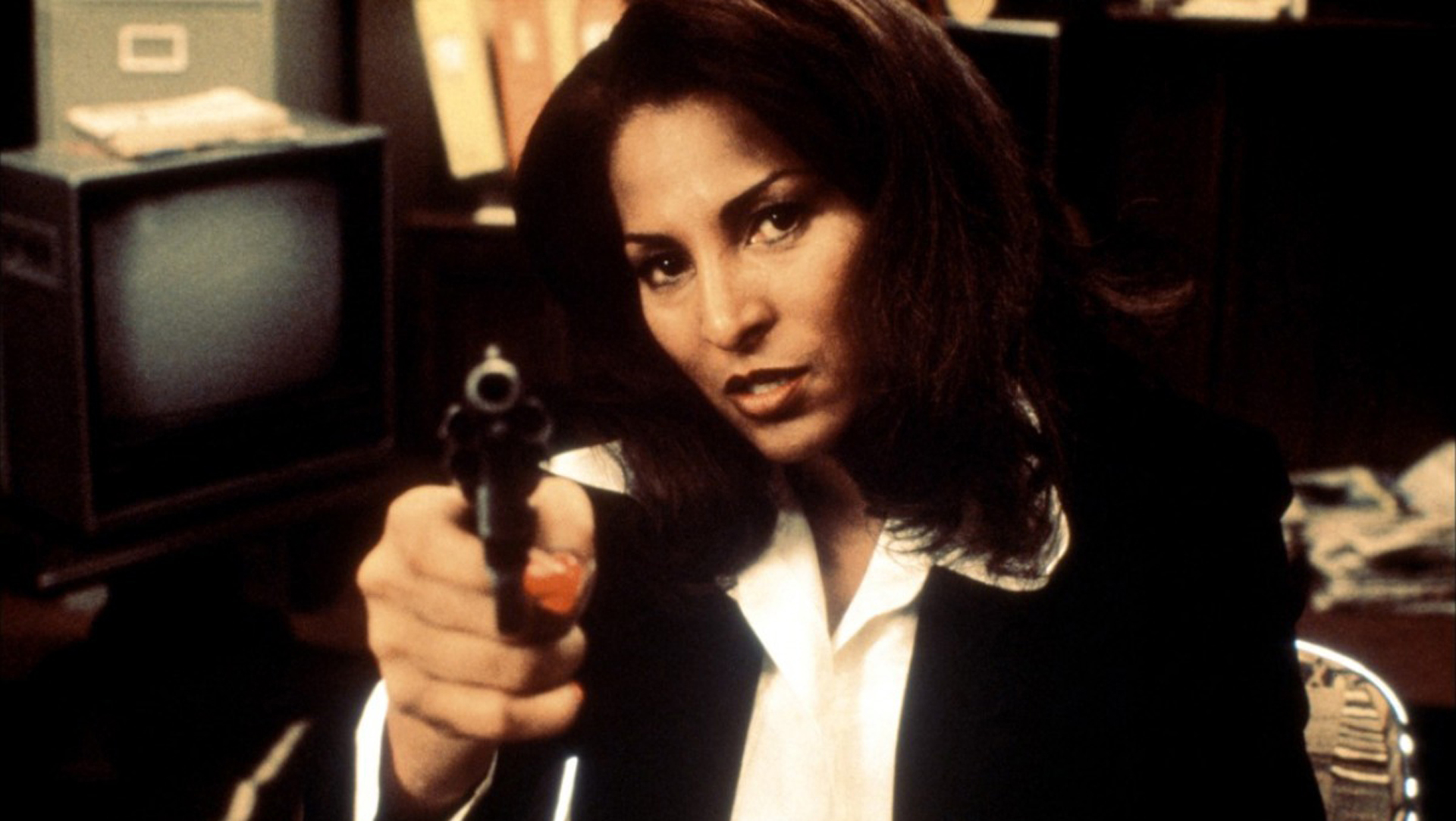 Jackie Brown is Tarantino’s under-appreciated, mature gem. Another excellent genre mash-up that doesn’t get enough credit. Pam Grier plays the unlucky but incredibly resourceful Jackie Brown, a character influenced by Grier’s past roles in blaxploitation films Foxy Brown (1974) and Coffy (1973). Jackie finds herself caught in the middle of a war between the ATF and Ordell Robbie, a gun runner who’s been cornered and has begun killing off his associates in an attempt to keep himself out of jail. Jackie keeps herself alive with the help of Max Cherry, an aging bondsman.

Jackie Brown is an expertly polished work; the soulful soundtrack moves the picture along without skipping a beat. The dialogue is heavy, as usual, but nothing seems bloated or unnecessary. The plot is complex yet neat; the characters are perfectly set for this film noir and Pam Grier turns in a career-rejuvenating performance.

An obscure, drug-fueled odyssey through Los Angeles. Savage gangsters and unhinged cocaine queens are the focal point of Quentin Tarantino’s iconic picture. Pulp Fiction uses the director’s trademark nonlinear structure to tell its violent story, and ultimately bring them all together in a messy American diner. It has become one of the most beloved cult films of all time, and thus is regarded as Tarantino’s magnum opus. Every scene is as memorable as the last: the dance between a doped up Vincent Vega and Mia Wallace in Jack Rabbit Slims; the incredible turn of events between Butch and Marsellus Wallace; and, of course, Samuel L. Jackson’s biblical monologue before he reigns down unholy gunfire on helpless folks.

It’s a grand spectacle of criminal and drug culture, only these drug addicts and gangsters are fully realized and even likable. Everything works, and it’s a bloody, demented miracle. 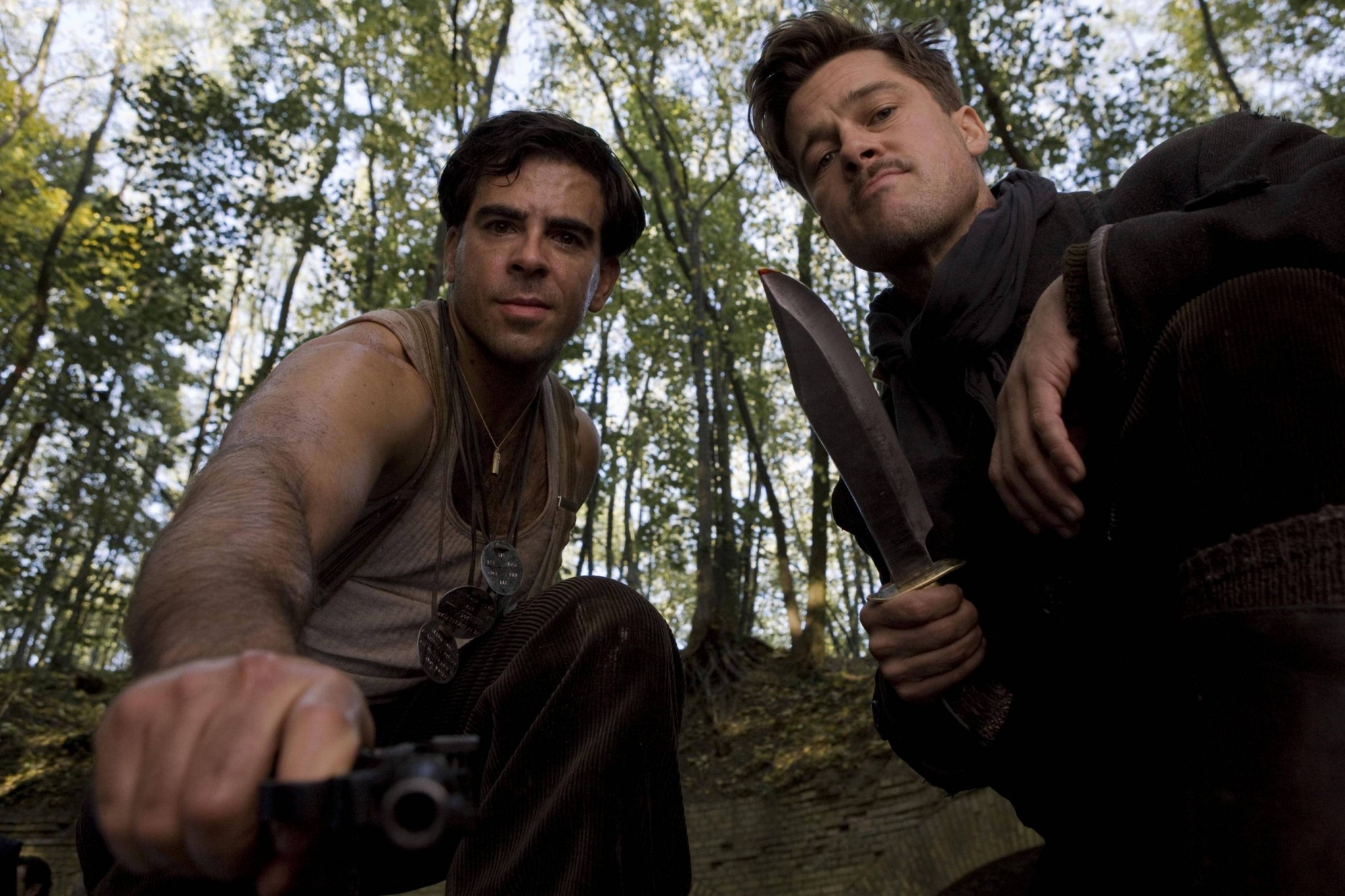 Behind the horrific theater of Nazi Occupied Europe and the deadly uprising of a special team of killers called The Basterds, Tarantino muddles history with this unconventional take on the war. The stellar opening scene in which the evil Col. Hans Landa sniffs out an unfortunate Jewish family in rural France echoes the tense beginnings of Sergio Leone’s The Good, The Bad and The Ugly. Inglourious Basterds is violent, colorful and all around beautiful. Intense close ups, detailed costumes and a great cast help nudge the film above Pulp Fiction. It sees Tarantino evolving as a filmmaker, using a greater variety of shots, tackling heavier subjects and even having the nerve to mold WW2 history to his twisted obsession with mayhem and charm. Add breakthrough roles from Christoph Waltz, Michael Fassbender and Melanie Laurent, and you have an epic, hilarious war-time experience.