Welcome to The Green-Light, a column from Gary Green. Find within spittle-flecked passion and encyclopaedic insight on everything to do with the movies.

Noise, noise, and more noise; that’s all there seems to be surrounding Asif Kapadia’s new doc, Amy, which follows the short life of the newest member of the 27 club, Amy Winehouse. Sometimes, the noise gets so loud and so inane, I feel kind of sick; but before I throw up on you, allow me to explain what this noise actually is. Firstly, there is the movie. Secondly, there’s everything else; opinions, propaganda, press, publicity, controversy – endless white noise trying to gain purchase in a vacuum, one in which only the movie should exist. Of course, nothing happens the way it does without something else happening first; call it causality, call it influence. Amy is the product of many intelligent, creative minds coming together who have each been touched by, and moved by, art, people, places, things. This is natural downflow, cultural overlap; it’s why stuff resembles other stuff, unconsciously or deliberately. But there’s also, unfortunately, different kinds of influence too, ones which threaten to detract from the movie. 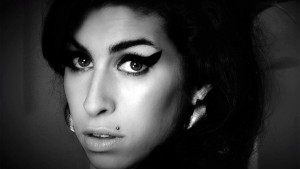 The latest example is the highly-publicised war between Winehouse’s family and Kapadia. The singer’s father, Mitch Winehouse, has claimed that the film portrays him ‘as a villain, which is completely and totally unfair.’ He’s even considering ‘legal action,’ and according to him, the documentary portrays himself and Amy’s family as ‘negligent’; Kapadia’s own response was on the terms that Amy’s story is ‘not a drama where you kind of have goodies and baddies. It’s much more complicated.’ Mitch probably hasn’t seen the many five-star reviews the film has garnered so far (including our own), and probably doesn’t care; my point is, neither should you. And you shouldn’t listen to Mitch, either. Allow me to explain.

You can’t allow yourself to be distracted from the movie. Treat going to see a film like entering a courtroom and laying down your hand on Eisenstein’s cinema bibe: there is the movie, the whole movie, and nothing but the movie. Now, I’m certain there are more fun-sounding analogies out there – but I’m trusting you to grasp a pretty simple conceit. Would you have been as stunned by Heath Ledger’s performance as the Joker in The Dark Knight if he had survived his overdose? Would it have been as much of a talking point if he were still among us? Harsh words; I’m aware of that, and we’ll never know otherwise. But consider for a second the implications all that white noise has on our perceptions of a movie; sometimes, I imagine the only true place to watch a film would be if I were thousands of miles away, sat alone on a desert island with only a TV, a solar-powered generator, and DVDs delivered via albatross. Then again, I can’t imagine the internet connection’s any good. 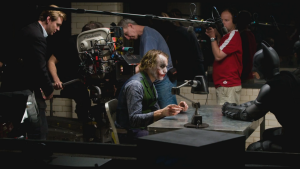 Cast and crew on set of The Dark Knight. Could any of them predict the film’s impact?

But as I’ve already said, there is the good kind of noise; away from celebrity gossip and hearsay, there’s genuine inspiration. And when a film does come out in the heat of topical discussion, it may make more of an impression on us than it would have done before; Amy is the latest receiver of such a climate. It’ll probably help it out at the box office, if I’m thinking positively; but does Kapadia want our money, if we’re only interested in his film because of what is essentially an elaborate, if highly publicised argument?

A lot of people believe a documentary should lie as close to the facts as possible. And they wouldn’t be wrong in thinking so; it is supposed to be a re-enactment of real life, isn’t it? But my grief is aroused when there are those – like Mitch – who impose that the entire story hasn’t been told, because of the way the filmmaker wanted to tell it. Editing is a powerful process; it can destroy a film, or make it great. There can also be casualties, and Mitch perceives himself to be one. In Kapadia’s case, there was always a big responsibility in taking on such a project – that is most certainly true. And Winehouse’s family are allowed to have their grievances, and the freedom to pursue those; that’s without question. But the director wanted to make a documentary that fully captured the talent, spirit, humanity, and mystery of Amy Winehouse – and as far as he’s concerned, he’s taken every step to make sure that has happened. What else matters, then? Certainly not the noise outside his film.

I think While We’re Young, the terrific Ben Stiller comedy from indie master Noah Baumbach, serves up a terrific example of just what I’m talking about. At the end of the film – and we’re in heavy spoiler territory here – Stiller’s character, Josh, uncovers the truth behind his newfound young friend Jamie (Adam Driver) and his documentary. In finding out that Josh has been lying about how the events in his film unfolded, Jamie confronts him at a ceremony celebrating the life of another much older, wiser filmmaker friend, Ira (Peter Yarrow) – but he doesn’t get the applause he expects. Ira options that it doesn’t really matter that Jamie engineered the events of his documentary to unfold exactly as he wanted them to; what Jamie had achieved, on-screen, was something that got to the innate nature – the elemental truth – of its subject than a strictly journalistic approach would ever have produced. And I believe Amy is the same: here, Ben Stiller is Mitch Winehouse, and Adam Driver is Asif Kapadia. That bizarre imagery aside, what I’m getting at is that what matters the most, above everything else, is the end result. What you see on the screen. I‘m not saying, in this case, that the end justifies the means – because that opens up a whole other barrel of ethical discourse. What I am saying, is just watch the movie, and make up your own damn minds. 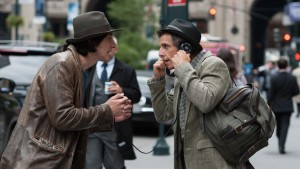 Does the fact that Tom Cruise is a near-sociopathic Scientology-sycophant stop you from liking his movies? It shouldn’t; his acting should be the only thing that matters to you. It might sound naive, perhaps even hopelessly optimistic, but just think of cinema – nay, all art – in terms of time outside your own life. In 50, 100 or even 1000 years, will people still be watching this particular movie, and if so, why? Will it be more popular then? Will they even still watch movies? That’s the sentiment that most grabbed me about Roger Ebert’s 2004 speech at the American Film Institute; that film lives outside of time. If only we could see that, then maybe we’d be looking out for the right things, and not get distracted by the wrong ones. Like Amy’s music, this film will live on regardless of all the noise; already, you can hear it fading.

Amy is out now in cinemas.