Spider-Man: Homecoming swung into US theaters this weekend and had an impressive debut. It topped expectations, taking in a huge $117 million, which makes it the franchise’s second most successful domestic opening. 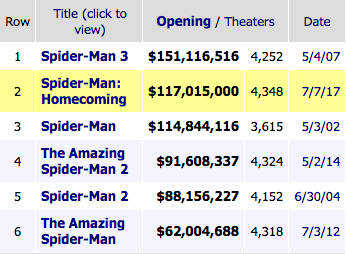 It also stormed well clear of last week’s top movie, Despicable Me 3, which fell to second. Edgar Wright’s Baby Driver also moved down a place to third. See the top 5 below via Box Office Mojo:

Tom Holland’s first solo outing as the web-slinger also has a higher domestic debut than fellow superhero movies Wonder Woman and Logan, beaten only by Guardians of the Galaxy Vol. 2 which took $147 million in its opening weekend.