Rough Night had a rough opening weekend at the box office, while Cars 3 sped to the top.

The Scarlett Johansson-starring comedy struggled, debuting in 7th place in the weekend’s domestic chart. It took just $8 million, which is poor considering it was projected to take $25 million by Box Office Pro. It’s also disappointing in comparison to movies of a similar nature, like Bridesmaids and The Hangover, which performed much better on their debuts, with $21 million and $45 million respectively. Rough Night’s rocky reviews are thought to be the main cause.

Meanwhile, Wonder Woman still had a strong weekend but fell to second place, pipped by Disney-Pixar’s Cars 3. The family animated film had the worst opening in the series’ history but still took top spot.

While there were other solid debuts for Tupac biopic All Eyez on Me, which took third, overtaking The Mummy. And shark thriller 47 Meters Down landed in fifth. The Book of Henry however, had a devastating debut, just scraping $1 million in thirteenth place, following awful reviews. See the list below via Box Office Mojo: 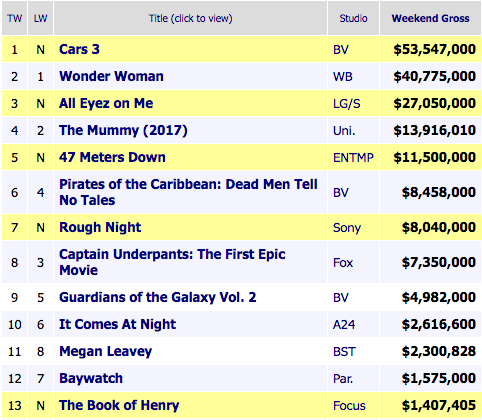