When Netflix paid a handsome fee for the distribution rights to Sundance hit The Fundamentals of Caring, writer and director Rob Burnett could have been forgiven for thinking he was on easy street. The filmmaker made the movie on a modest budget, but still managed to nab a stellar cast. Paul Rudd, who is now best known as Ant-Man, leads the cast. He plays a grieving man who throws himself into care-giving and finds redemption with Craig Roberts’ wheelchair-bound Trevor. 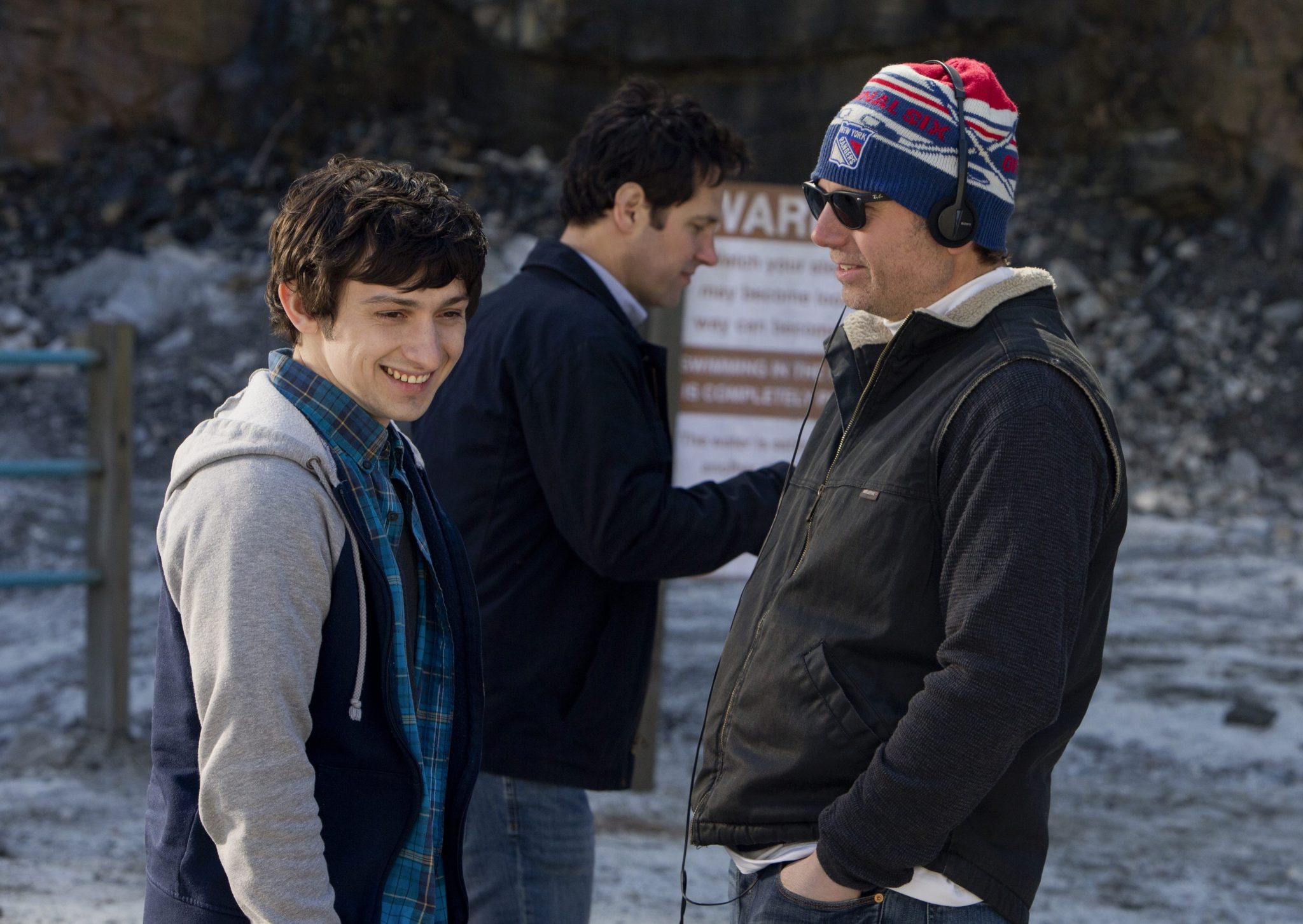 Burnett on set with Roberts and Rudd.

Most intriguing is the casting of Selena Gomez. The young actress has begun to find her way into some fascinating movies, and has truly cast off the ‘Disney Princess’ tag that might have otherwise burdened her career. We spoke to Rob just before his film premiered at the Edinburgh film festival, and here’s what he had to say about his cast, starting with Gomez:

“Selena Gomez is a tremendous example of someone who isn’t resting on her laurels. She could easily do that forever. She’s not satisfied just doing Disney movies, she’s pushing out. She did Spring Breakers and now she’s done this with us. It’s impressive. It keeps you artistically challenged.”

Were you ever worried about the high profile and potential baggage that comes with someone like Selena?

Yes. I think that Selena comes with a burden of sorts. From a commercial stand point, it’s amazing to have someone of her profile in your movie, but that’s a double-edged sword because “oh my god, that’s Selena Gomez” and that can take you out of the movie. Her acting has to be that much better because of it.

The way she came into the movie was through Aleen Keshishian, who looks after Paul [Rudd] and Selena. She called me up and said she had someone perfect for the part of Dot. I said perfect and asked who it was. Aleen said she wasn’t going to tell me. I know she’s brilliant and great, but I said “Aleen, as the director I’m going to need to know who it is!” She said all she could tell me was that it was someone super-famous who has 12 movie offers on the table but mine was the only one she wanted to do. So we set up the meeting without me knowing who it was. 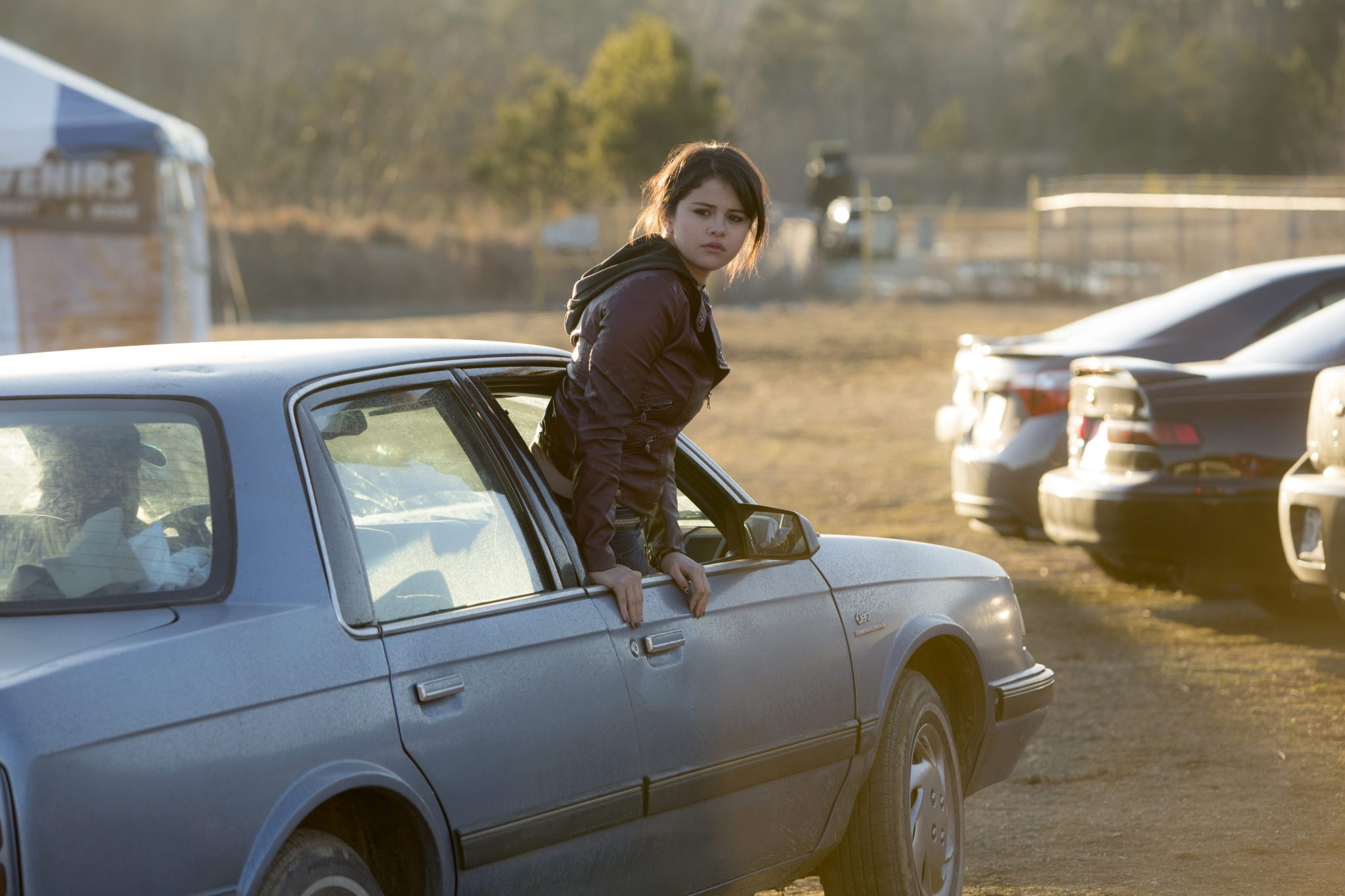 I could have probably Googled it, but wanted the full experience of it. So 11 o’clock in the morning I get a knock on the door and it’s Selena Gomez. I instantly hit it off with her. She is so down to earth. It’s funny how we consume these celebrities in a certain way. I had seen her singing on the Letterman show, on the cover of magazines all glammed up, but then there she is in front of you in army pants and a sweater, and you realise she is still a kid. I think she is 22. She looks like one of my daughter’s friends. She came with no entourage and we sat and talked about the film for 2 hours.

She was very smart and had a literal attachment to the script. I think there were things that resonated with her about it in her own family life. She could have easily said “I’m not going to audition, you already know who I am.” But she auditioned 3 times. She came down from L.A.

I just found her lovely to work with. Hard-working and a great collaborator. I think she is just at the start of having her real abilities come out. She does have to work that much harder because of who she is to let you in. I think she does it in the movie relatively quickly through her performance.

Just on a personal level. I’ve been around a lot of fame through my time working on the Letterman Show, but she has a different level of it. It’s like nothing I’ve ever seen before. It’s a white-hot molten lava of fame. It’s not like anything I’ve been around. This is the real deal. Everyone else is pretending to be famous. And amazingly, she navigates it with a grace and elegance I’ve not seen before. This is what celebrities should aspire to be. I’ve seen people a lot older than her become insane with fame.

She is so down to earth. I think she is just at the start of having her real abilities come out.

I was driving in New Mexico at 2 o’clock in the morning and I was going too fast. I’m normally a very safe driver, but it was early in the morning and I saw these flashing lights in my mirrors. A female police officer came out, and I’m not proud of this, but I began to spew as much show business as I possibly could. It was for no other reason than sometimes that works. I don’t know why it does, I don’t know why people in show business don’t get speeding tickets.

I said it all. I told her I worked on the Letterman Show. I mentioned working on Ed, which had Julia Bowen in and now she is in Modern Family. Nothing is working. I finally mention my current situation about scouting a movie and tell her that Paul Rudd is in it. The second I mention his name, the ticket pad goes away and I get a warning. Everything changes. This is how much people love Paul Rudd. God bless him! 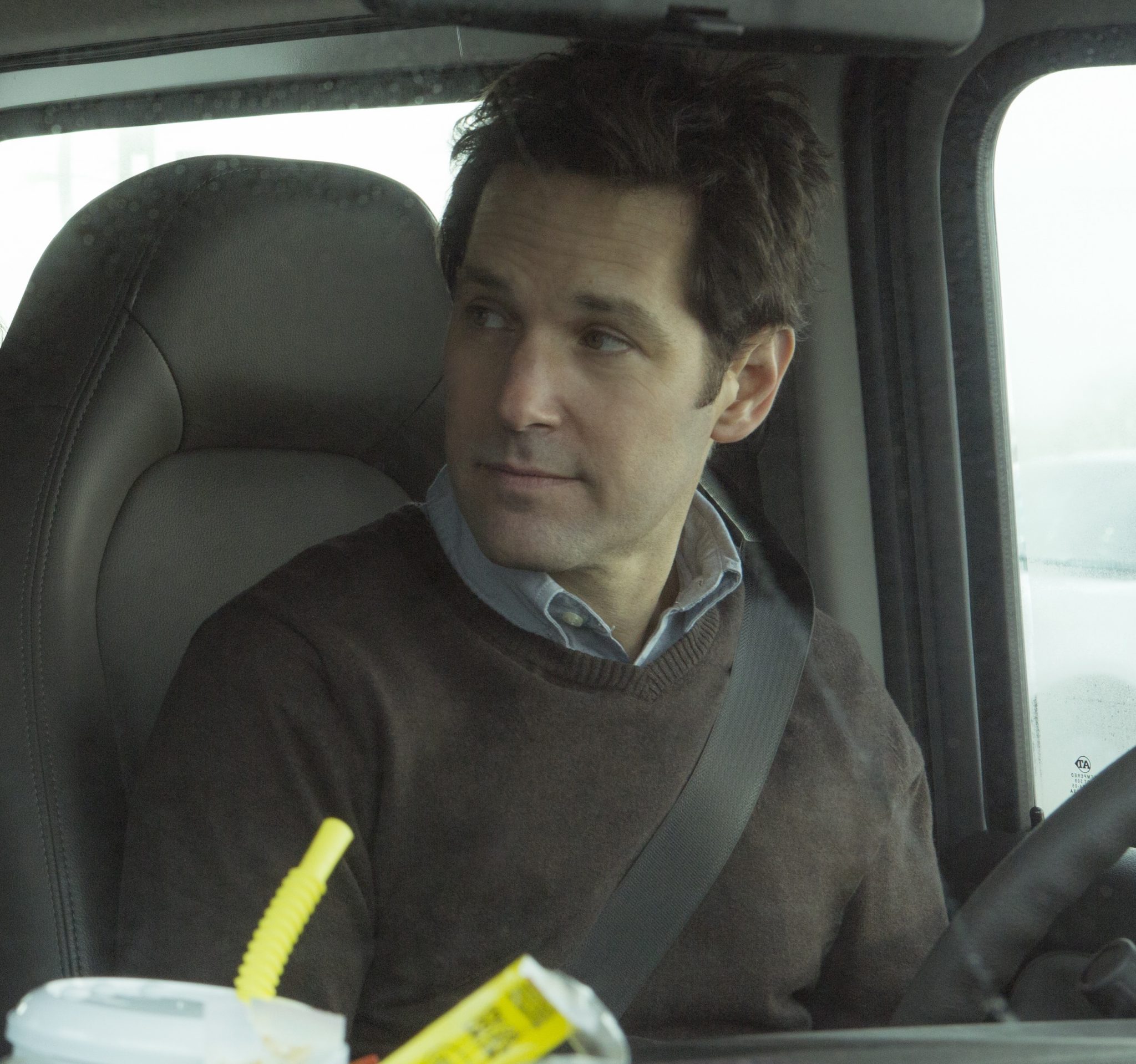 Ruud puts in a melancholic and haunted turn as Ben.

Paul is an instantly likeable, funny guy, so what was it like giving him a more serious role in this film?

The thing is, he is a classically trained actor… It just so happens that he is also one of the funniest people on Earth. When I was writing this I knew I needed both. It becomes a shortlist of actors who can do nuanced drama and comedy. Plenty can do either, but not many can do both. I dreamt of having him for this as I wrote it.

The other great thing about Paul is that he is likeable in repose. It’s in his face. Whenever you say Paul Rudd people just say “oh, I love that guy!” It’s sickening.

It gives you a great advantage. A different actor making jokes about Muscular Dystrophy? You can push more jokes out because he is so likeable and accessible. He was a dream to work with frankly.

Not many actors can do both drama and comedy. I dreamt of having him for this as I wrote it.

Having thought of Paul for that role whilst writing the film, was it a different process for finding Craig Roberts to play Trevor?

Completely different. Paul was already attached, and once you have him you have everything. Everybody could see it was a meaty role opposite Paul, and we honestly had every actor in the world of that age available to us. We must have seen over 250 different actors at least.

I knew that this movie was going to rely on the chemistry between these two. I think without it we wouldn’t be sitting here. We looked at many guys, and I had seen Craig in Submarine and thought he was great in that, and what a lovely movie that was. 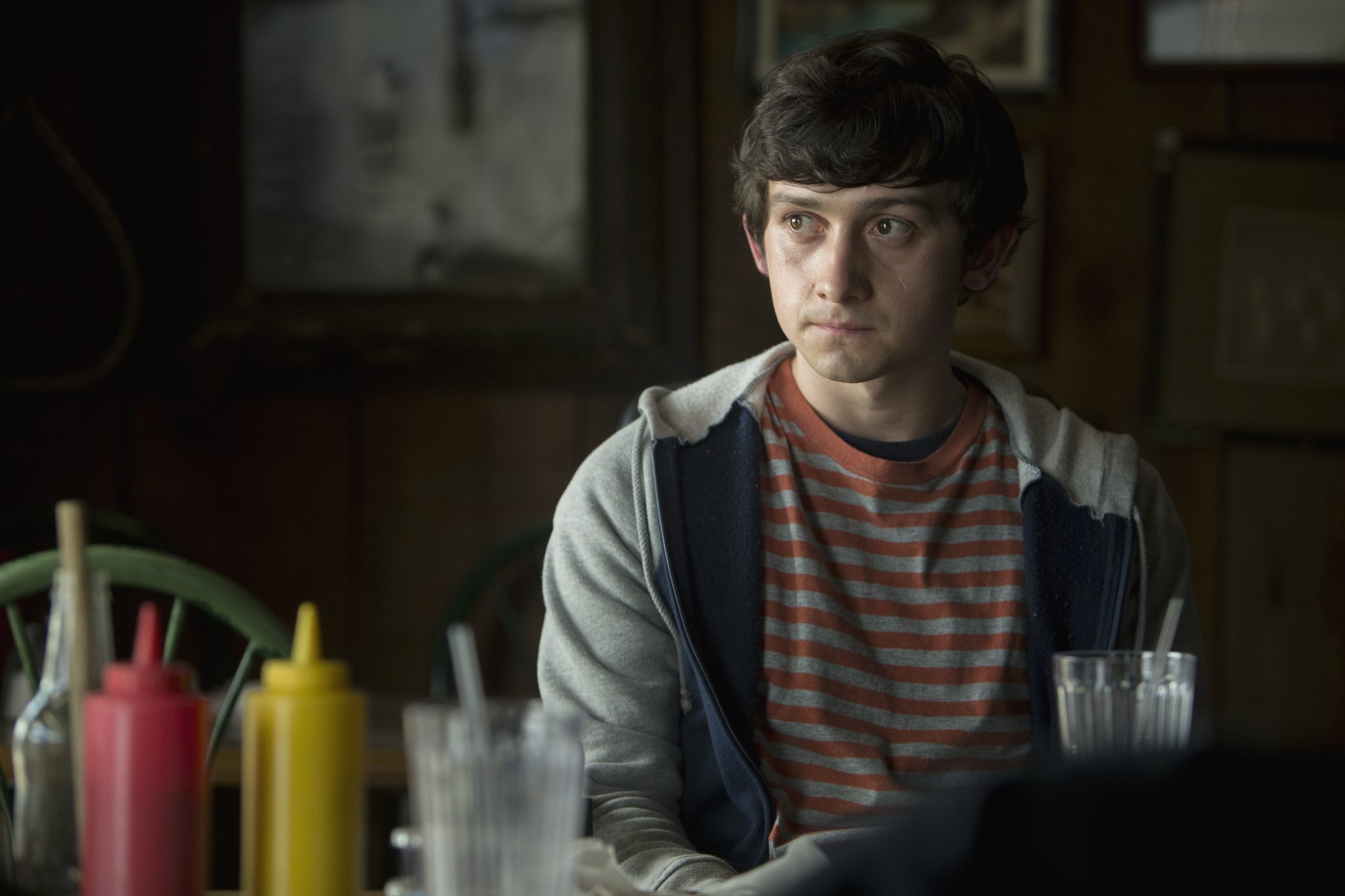 Paul came up from Atlanta whilst he was preparing for Ant-Man. He read with three or four actors, but the minute we saw him and Craig together we knew we had something. I was very excited. Craig has a natural understanding that you can’t lean into material. Both the drama and comedy are slight. We get big laughs at screenings, and that is satisfying, but also tears. You get the full experience, but it is all very small. There is nothing broad about it.

I knew Paul could do it, but Craig keeps it super real too. Within the 23 day shoot, if you don’t have an actor that gets that, it is tough. We knew the target. We all went for it.

These two do a great job together. I’d like to take all the credit, but I could have yelled “Action!” in the morning, gone home and come back in the evening to yell “Cut!” and we would still be here. It would have been fine.

They are just that good.

One of the things that makes this film work is that with both Craig and Paul, the sadness of their situation is in every frame. If you look into those eyes you never forget that this is a kid in a wheelchair. I really hope Craig gets some attention after this, he deserves it.

The minute we saw him [Paul] and Craig together we knew we had something.

The Fundamentals of Caring was screened at The Edinburgh Film Festival and will be available on Netflix from June 24th. Check out our review of the film here. And watch the trailer below: