Logan Lucky had a disappointing debut at the US box office, as it was comfortably beaten by another newcomer, The Hitman’s Bodyguard. The latter snatched top spot from Anabelle: Creation, which fell to second.

Logan Lucky rounded up the top 3, taking in $8 million, which is not great in comparison to its $29 million budget. The Samuel L. Jackson and Ryan Reynolds action comedy impressed however, grossing $22 million with the same budget.

See the top 10 below via Box Office Mojo: 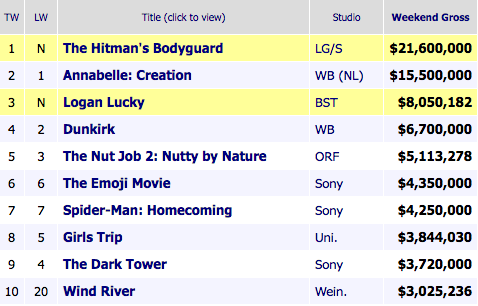